I've only just read that one of the founders of the Holy Land Foundation, at one time the largest Muslim charity in the US, has been given 65 years for "providing aid to the Palestinian group Hamas".

There are now many reports on Google news. At the moment the top report is the BBC's website whose report, together with the headline, openly sides with the prosecution. 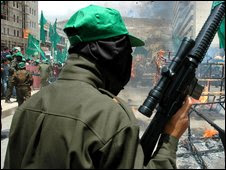 So why the picture?

Al Jazeera's report mentions something that the BBC report omits:

As grounds for an expected appeal, lawyers for the men are expected to challenge testimony given by an anonymous Israeli government agent, whose evidence was kept secret from the defence.