They shoot children, don't they?

Just in from Just Peace. According to Monthly Review there has been a fly poster campaign in and around University College Berkeley campus. Here's the poster: 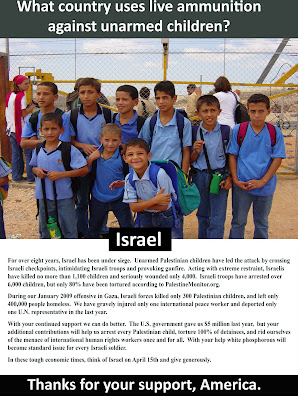 You could click on the pic to read the wording or see right here:

"For over eight years, Israel has been under siege. Unarmed Palestinian children have led the attack by crossing Israeli checkpoints, intimidating Israeli troops and provoking gunfire. Acting with extreme restraint, Israelis have killed no more than 1,100 children and seriously wounded only 4,000. Israeli troops have arrested over 6,000 children, but only 80% have been tortured. . . .

"With your continued support we can do better. The U.S. government gave us $5 billion last year, but your additional contributions will help us arrest every Palestinian child, torture 100% of detainees, and rid ourselves of the menace of international human rights workers once and for all. In these tough economic times, think of Israel on April 15th and give generously."

But if you click on the poster you could reproduce it.

Apparently the posters are being pasted over adverts for students to study in Israeli colleges:

The Study in Israel billboards were carefully designed to appeal to the U.C. system's multicultural student body. One featured a group of Southeast Asians and another a women in hijab (traditional Muslim head covering). One of the artists behind the alternative campaign finds this portrayal of Israel as a society that is welcoming to people of all cultures particularly troubling. "Not only is Israel an apartheid state, where Palestinians -- whether they wear hijab or not -- do not have equal rights with Jewish citizens, but Muslims who attempt to travel there as tourists or students are very likely not even to be allowed into the country," the artist observed.***

MR has this to say of the "guerilla ads":

While the guerrilla ads are not affiliated with any organization, www.stopthewall.org, www.bdsmovement.net, and www.whoprofits.org are excellent sources of information.

I've nothing to add to that.

***Woops, I do have something to add to that. I've had a complaint that

"Muslims study freely and are allowed entry into and out of israel.

This 'artist" has no idea what is going on in or out of Israel.

He/she finds it "very likely" ...what? he/she has not bothered to find out? Oh but why look for reality when you've got a nice packaged little story you can put on a poster, even if it's a lie?"

I cut the first thing that "Jill" said because it was just a little bit rude and this is a family blog. I simply responded to say that it's not actually as straightforward as "Jill" is saying, wrongness doesn't amount to dishonesty and that the poster itself is sound. I told her that I would link to her comment in the post itself which I have now done. Then it occurred to me, she only complained about the stuff about Muslims studying in Israel. It didn't occur to her to deny Israel's targeting and killing of children. Not just another shrill "Jill". A woman of the highest integrity. I do hope she comes again to keep on the straight and narrow.
Posted by levi9909 @ 8:35 pm