The Meaning of Cast Lead

A year after Israel's colonial punitive expedition against the natives left over 1400 dead, mostly civilian, 320 children — a wake of willful, sadistic destruction — summary and analysis abounds. Lenin's Tomb has an excellent encyclopedic account of the events and their logic and consequences: Operation Cast Lead One Year On.

Lawyer Michael Sfard, in a widely republished article, discusses the transformation of Israel that Cast Lead represents. I would take issue with Sfard's nostalgia for "values upon which [Israel] was created." I think these values were primarily national chauvinism and white supremacy, so there isn't much to return to. But that aside, Sfard's point is important. If hypocrisy is the tribute vice pays to virtue, Israel has changed from a country that can't act with virtue to a country that can't tell the difference between good and evil. That's a substantial degradation.

A year later, the images etched in my memory are the photos of young Israelis having a picnic to watch the smoke bellowing over Gaza and the IDF air attacks. 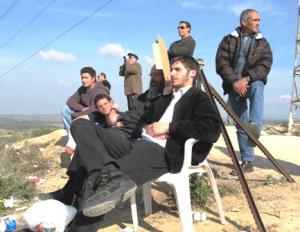 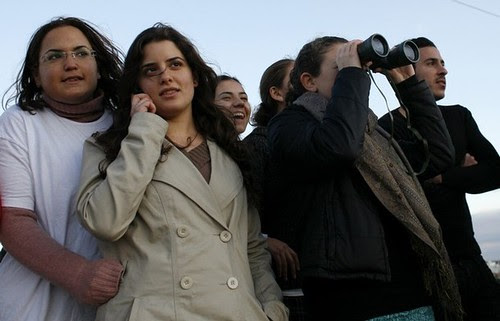 Magnes Zionist describes the dehumanization of the people of Gaza in Israeli consciousness. But "dehumanization" is a word with a double meaning. There is a people of Gaza who are treated as if they were not human. And there are the people in these pictures above, who have dehumanized themselves by giving up the elemental human ability of telling the difference between right and wrong.