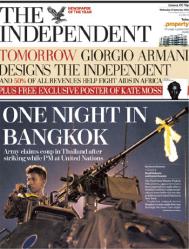 My over-reliance on google means that I sometimes miss even the Independent's front page. For those that don't know, the Independent is a (used to be) broadsheet. It's market is the liberal minded end of the same UK market as for the Times, Telegraph and Guardian. Its unique selling proposition is its in-yer-face front page as shown here.

It's had a few covers recently on Israel and Lebanon. Also it had a crop of letters recently some of which likened Israel to nazi Germany. Well now they have published a letter from a chap complaining that that is why he (and indeed other "zionist Jews") doesn't buy the Independent anymore.

Sir: Like most Zionist Jews, I have been unable to read The Independent for a number of years. Your headline "Gaza: the children killed in a war the world doesn't want to know about" (19 September) reminds me why.

At a time when the UN is meeting to discuss the crisis in Darfur, where there are fears of genocide, and there is talk of a constructive dialogue being established between Israel and the Palestinian Authority, The Independent returns to one-sided Israel-bashing in the most emotive of ways - devoting its entire front page to Israel killing children, a subject used throughout the years to marginalise and dehumanise Jews.

But there is an expression of gratitude from one reader:

Sir: I cannot thank you enough for your recent campaign to bring attention to the plight of Palestinians in Gaza, nor encourage you enough to continue this campaign so the world cannot say it didn't know about the desperate situation in Gaza.

I just returned home to the US from doing human rights work in Palestine, and it is absolutely maddening to me how the US media never tires of defending and making excuses for Israel's crimes against Palestinians.

I understand that speaking out against Israel's gross violations of human rights ensures you an onslaught of criticism. However, you must believe in the urgency of your work and continue with your campaign to bring attention to the plight of Gaza.

And then we're back to zionist mythology:

Sir: Harry Perry's paean of hate against Israel (letter, 13 September) offers scant hope for any peaceful resolution of the conflict and misses many vital points.

Israel exists by decision of the League of Nations and the UN. The partition boundaries of 1948 were set on the basis of land purchase by the Jews, and their extension occurred because of unsuccessful Arab aggression. Few countries have such a claim to their territory.

I am sorry about the plight of the displaced Palestinian Arabs, as are many Israelis, but over half the Israeli population is descended from Jewish refugees from Arab lands, who were resettled at Israeli expense.

Mr Perry might like to reflect that the increase in oil revenues to Arab states and Iran this year amounts to about $140,000 per refugee. If the notably under-populated Arab states had compassion for their compatriots, every refugee could live in a palace.

I've said before that, as far as I know, the Independent is the only UK newspaper with a Jewish editor. I think so anyway.
Posted by levi9909 @ 6:09 am