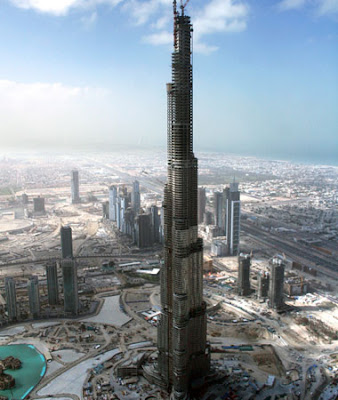 It seems Lev Leviev, the Israeli diamantaire who builds settlements on Palestinian land for a hobby, bit off a bit more than he could chew in Dubai. A mere two weeks after announcing grand designs to open two of his lavish stores in the blingtastic emirate, a spate of bad press and activist pressure seems to have convinced his erstwhile landlords to give him the boot.

The edifice on the left is the Burj Dubai, slated to be the tallest building in the world when complete. With Dubai as an up and coming international hub of diamond-trading, why wouldn't the self-described "diamantaire extraordinaire" want to set up shop in such a landmark? As his flacks proudly announced on April 16:

One LEVIEV store will be a flagship boutique located in the most prestigious section of the BURJ DUBAI Mall, billed as the world's biggest mall, under the world's tallest building, the BURJ DUBAI Tower, culminating at approximately 2,000 feet.

Construction of the store will begin in the 4th quarter of 2008, when the mall is ready for tenants, and inaugurated when the mall opens to the public.

The LEVIEV Dubai flagship will be a full-fledged LEVIEV store, complete with elegant design elements that are a constant throughout all LEVIEV boutiques, a private salon, and several thousand carats of extraordinary diamonds.

The only problem with this plan, and it appears the Diamontaire Extraordinaire still hasn't figured it out, is Leviev isn't the best corporate citizen. When he's not building settlements on Palestinian land and impoverishing the farming villages of Jayyous and Bil'in, for example, or housing security companies in Angola where he gets he rocks which are known for “humiliation, whipping, torture, sexual abuse, and, in some cases, assassinations,” Leviev is busy blaming his "business competitors" for being behind all the protests against him in Palestine, Tel Aviv, New York, and London. He just doesn't seem to get there are people out there who are genuinely motivated by human rights.

To recap, on April 18, Adalah-NY and Jews Against the Occupation-NYC released a call to the people and government of Dubai to boycott Leviev. They were joined in their call by the villages of Jayyous and Bil'in, and Palestinian civil society organizations. A steady drumbeat of negative press, including Khaled Amaryeh,Islamonline.net, and Will Youmans in Arab-American.net, appeared to be enough to persuade Dubai officialdom that Leviev was not worth the hassle. Even the Jerusalem Post noticed the hubbub. Abbas al-Alwati in The Gulf News, April 30:

Dubai: No trade licence has been granted to open Israeli jewellery store Leviev in Dubai contrary to claims by Leviev and its agent in Dubai, said a top official at the Department of Economic Development.

"We are aware of these reports and have not granted a trade licence to any business of this name. If such an application does come to us we will deal with it accordingly," Ali Ebrahim, Deputy Director General for Executive Affairs in Dubai, told Gulf News.

Now how did a heimishe fellow like Leviev get brought to the Gulf in the first place? Naturally, by his local Palestinian-Moroccan business partner, Arif Bin Khadra, clearly a principled fellow:

Asked if he was aware of the activities of Lev Leviev's companies in the West Bank, Bin Khadra said that he had heard of Leviev's practices in the West Bank but had seen no proof of the allegations, adding that they were not a major concern because "such questions are not asked in the diamond business".

Dubai, he said, was an apolitical and international city that needed global brands such as Leviev. "What we have learned here is that you don't have to talk about politics or religion if you're doing business," he said.

Bin Khadra added that he knows of other major Dubai-based jewellers who were interested in bringing Leviev to the UAE. "If we hadn't brought Leviev, someone else would have".

The question remains as to whether Leviev will attempt to peddle his wares in front-shops managed by his apolitical friend Arif.

So it appears Leviev has lost his dream of a flagship store in the world's tallest building. The question is, will Leviev figure out that violating international humanitarian law is harming his image and business interests?

Another interesting item that got my attention while reading the local paper over breakfast today:

"Israeli Jeweller Has No Trade Licence To Open Shop In Dubai," reads the headline in today's Gulf News.

There is a whole lot of money floating around in Dubai who could blame Lev Leviev for wanting to open one (or more) of his self-named stores in the tiny emirate?

But, according to this article, no trade licence was granted to Israeli diamond magnate and the Dubai Department of Economic Development is quoted as saying that "Israeli citizens are not allowed to operate in Dubai."

Advocacy groups that oppose Leviev's investments in the U.A.E. say Leviev profits from companies that operate in the occupied territories.

The stores were supposed to open in the swanky Dubai Mall and the Atlantis Hotel later this year.

Who will win this one?

UPDATE:Ha'aretz buys into Leviev's "business competitors" theory for his woes,Finkelstein declares,"Long live the People's Republic of Dubai!," and the JC, May 2:

DIAMOND TYCOON Lev Leviev has announced plans to open at least two more luxury jewellery shops in Dubai, after launching one such outlet there in the Qasr Hotel last March. His plans have come under attack from pro-Palestinian lobbyists, who are urging the United Arab emirates to boycott Mr Leviev.