I mentioned in an earlier post that the assault on Gaza may turn out to be Israel's Sharpeville. The Sharpeville massacre was carried out by the apartheid authorities in South Africa back in 1960. 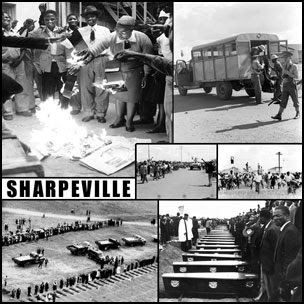 From South African History On line
It was the turning point that transformed the struggle against apartheid from a left-wing cause into a mainstream liberal one. Of course Israel has committed many a Sharpeville but the media, western governments and official oppositionists have so favoured Israel, its massacres of the natives and neighbours of Palestine have gone mostly unreported or their cause and meaning has been distorted. The apartheid regime had nothing like the hasbara mule corps that Israel has. But I think the zionists may have lost the plot this time.

Tony Greenstein has a good round up (with pics) of the university occupations and he too notes that this is a first for the cause of Palestine, a turning point if you like. And when I wrote to a magazine earlier today, using the term "Israel's Sharpeville" I googled it first, and what do you know? it had been used before but only by one person (that I could find) and that was only a few days ago.

Lord Dykes (Lib Dem) used the expression after a little grovelling to a minister (I haven't checked which one) invoked Sharpeville in the House of Lords on January 19th and before that it's nowhere to be found on the net, not by google anyway:

My Lords, while accepting that the Minister has to be—and, indeed, is—even-handed between the combatants in this matter, does he not accept the reality that Israel is the established state?. The Palestinians are still seeking their independence and their state, which President Bush originally promised in 2005. Does the Minister therefore agree that the British Government have a duty to warn Israel about the stage it has reached with this monumental mistake of the invasion in Gaza? This is the equivalent of Israel's Sharpeville. Gaza will now be remembered throughout Arabia [I think he means the Arab world] as Israel's Sharpeville. The whole tone has now changed towards Israel in that whole area.

I think Lord Dykes might find that the people "in that whole area" were already wise to Israel's existence being predicated on its racist war crimes. It's the rest of the world that's taken a bit of a jolt from Israel's barbarism and it's world opinion that will make Gaza into Israel's Sharpeville.
Posted by levi9909 @ 6:25 pm