I've never known the hasbara machine to suffer such a major malfunction. Antony Lerman in yesterday's Comment is free suggests that Israel had it all its own way on the day it killed nine activists in international waters but so many facts are speaking for themselves that even zionist domination of the media cannot help Israel's battered image.
Martin Rowson in The Guardian has really summed up what most people must surely think of Israel now and possibly for some time now: 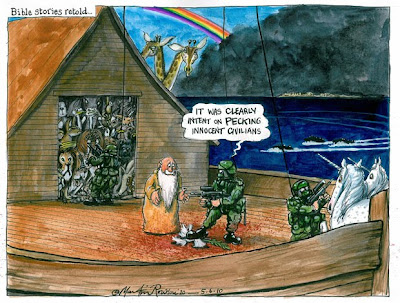 And of course, it's not just an image problem. In killing nine people from a country whose rulers have been allied with Israel, Israel has behaved more like the nazis than it has in its treatment of the Palestinians. The nazis too were so racist they held even their allies in eastern Europe in contempt. That's what Israel's attitude to Turkey reminds me of. For Tony Greenstein, who has told a few people off for likening Israel to the nazis before now, Mark Regev is what reminds him of the nazi propaganda effort. So we have Israel's ethno-religious supremacy, its relentless militarism, its racist contempt even for allies and its increasingly ludicrous propaganda and still the moderators at Comment is free will delete comments that make the obvious comparison of Israel to the nazis.
Posted by levi9909 @ 1:16 pm