They say Jews are quick learners, don't they?

This is from David Nirenberg's book, Communities of Violence, describing Christian violence against Jews on Holy Thursday. 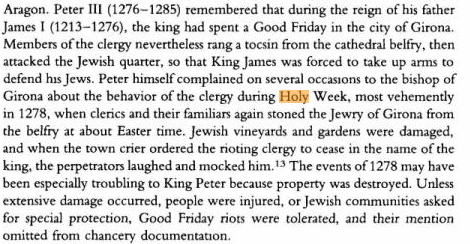 And this is from Haaretz, today:

"[MK Abbas Zakor] claims that on every Day of Atonement, jewish youth gathers at the entrance of towns and "hunt" passing Arab drivers. Without distinguishing between man and woman,elderly or child, they, he says, stone the passing cars. "Despite repeated complaint received by the different police stations, police never sends a single policeman to disperse the racist youth" (Haaretz, October 7 2008)