On Monday July 21, CODE PINK protested settlement cosmetics company Ahava at a Las Vegas trade show. On July 16 in Paris, there was a spirited protest at a chic beauty shop which carries Ahava. First off, CODEPINK's Nancy Kricorian writes on the group's blog, A.K.A. the PINK TANK: 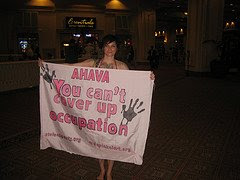 As the dust settled on the destroyed homes, schools and lives in the aftermath of Israel’s assault on Gaza earlier this year, mainstream human rights groups from Amnesty International to Physicians for Human Rights/Israel issued reports condemning Israel’s attack and alleging that the Israeli government and the Israeli Defense Forces had committed war crimes and crimes against humanity. The staff of CODEPINK Women for Peace re-opened a discussion of what we could do about Israel’s flagrant flouting of international law and the brutality of the ongoing blockade of Gaza, the occupation of the West Bank and the home demolitions in East Jerusalem. We decided to revisit the idea of a boycott against Israeli products—a boycott that was having more difficulty gaining traction here in the United States than in Europe. But the best way to end an occupation is to make it unprofitable, and one of the best peaceful ways to make something unprofitable is to organize a boycott.

While doing research on the Global Boycott, Divestment and Sanctions Movement for Palestine , I came across the web site Who Profits , a project of the Israeli Coalition of Women for Peace . On that site I found a list of Israeli and international companies that are directly involved in and profit from the occupation of the Palestinian West Bank. It seemed strategically and morally important to select for our campaign a corporation whose practices were clearly in contravention to international law. Many of the corporations on the Who Profits list were either unfamiliar to me, discouragingly huge, or didn’t seem like obvious targets for a women’s peace group. But I saw one name that I recognized: Ahava Dead Sea Laboratories. In fact, I knew there was a plastic bottle of Ahava Eucalyptus Mineral Bath Salts sitting on the windowsill next to the tub in my bathroom.

If you take a look at Ahava’s web site, you can read about the company’s environmentally responsible practices: “Our manufacturing processes are non-polluting and environmentally conscious. No animals are involved in testing phases and all of our products are encased in recyclable tubes, bottles and jars.” Ahava’s spokeswoman is fresh-faced Sex & The City actress Kristin Davis, whose commitment to doing good is evidenced by her status as an Oxfam Goodwill Ambassador and her position on the advisory board of The Masai Wilderness Conservation Fund. On the Ahava site, Davis is quoted as saying, “My personal beliefs, which include treating both animals and the environment with respect, are equally important to AHAVA.”

If you navigate around the web site you will see pristine images of the Dead Sea, enticing products with beautifully designed labels, and a photo of a water lily leaf with the caption, “This leaf has nothing to hide.” But, unfortunately, Ahava does have something to hide—an ugly secret about its relationship to a brutal occupation. The Hebrew word “Ahava” means love, but there is nothing loving about what the company is doing in the Palestinian territory of the West Bank. Ahava is an Israeli profiteer exploiting the natural resources of occupied Palestine.

AHAVA Dead Sea Laboratories, an Israeli cosmetics company, has situated its main manufacturing plant and showroom at the Israeli Jewish settlement Mitzpe Shalem in the Occupied Palestinian West Bank near the shores of the Dead Sea. Mitzpe Shalem, built on occupied land in 1970, is an illegal settlement, as are all Jewish settlements in the West Bank. Ahava’s capture of Palestinian natural resources from the Dead Sea is, according to the Fourth Geneva Convention, a patently illegal use by an occupying power of stolen resources for its own profit. To add insult to injury, Ahava’s labels claim that the country of origin of its products is “The Dead Sea, Israel”—this type of labeling has been decried by Oxfam, among other human rights groups, as blatantly misleading.

While we were working on putting together the new AHAVA boycott campaign we called STOLEN BEAUTY , CODEPINK led several delegations to Gaza, one of which never made it into the Strip because the Israeli government wouldn’t let them through the Erez crossing. Several CODEPINK activists decided to take a fact-finding mission to the Ahava plant in the West Bank, corroborating what we had read about the plant’s location and its practices. The women decided to seize the opportunity and—with the avid encouragement of the Israeli Jewish and Palestinian peace activists that they had met—they went to the Ahava store at the Hilton Hotel in Tel Aviv to stage a protest action. Some put on bikinis, wrote on their bodies with mud NO AHAVA/NO LOVE, while others carried signs with slogans such as “There is no love in occupation.” They chanted, sang and made the Israeli evening news

About a week later, we heard that Kristin Davis was going to be at Lord & Taylor on Fifth Avenue promoting Ahava products and signing autographs. Two of us went to the store to deliver a letter to Davis, requesting she stop letting Ahava use her beautiful face and good name to cover up their crimes. She was less than receptive, and we were escorted out of the store. A week later, the CODEPINK bikini brigade showed up at the “Tel Aviv Beach Party”—part of the Israeli government’s multi-million dollar “Re-brand Israel” campaign—in New York’s Central Park. The bikinis and our anti-occupation message made Fox News

We recently sent letters to Ahava’s headquarters in Holon, Israel, as well as to Ahava USA and Kristen Davis, giving them notice of our boycott. We sent copies of these letters to Shamrock Holdings, the investment company of the Roy E. Disney family, which owns 19% of Ahava’s shares. On Monday of this week, CODEPINK women showed up in bikinis and mud at the Cosmoprof North America Trade Show in Las Vegas to let Ahava representatives know we were launching our STOLEN BEAUTY campaign.

We have sent letters to over 100 retailers requesting that they stop stocking Ahava products because Ahava helps finance the destruction of hope for a peaceful and just future for both Israelis and Palestinians. In August we’ll be outside a drugstore, department store or mall near you, exposing Ahava’s dirty secrets and showing that real beauty is more than skin deep. You can go to www.stolenbeauty.org to find out how to join our campaign. And you don’t have to wear a bikini to do it.

And in Paris, July 16 on the Champs Elysees, French activists participated in a spirited protest directed at a retailer that stocks Ahava products:

Kristin Davis used to have her picture on settlement builder and diamantaire Lev Leviev's website, but when she was told about Leviev's settlement construction, she requested it be removed. Apparently she doesn't mind associating her good name with a settlement-based company when they pay her enough.
Posted by Nedster @ 10:13 am