Here's a report in the Jewish Chronicle I missed when it first appeared. I did mention the claiming of costs by the UCU over the FUCU case back in May this year but this later report has more detail.  Under the headline, Union seeks to reclaim costs after tribunal win, Marcus Dysch writes:


A union which defeated a harassment claim from a Jewish lecturer will go to court in November in an attempt to recover its legal costs.

The University College Union won an employment tribunal in April after Ronnie Fraser had claimed its anti-Israel policies amounted to harassment.

It is understood the claim amounts to around £500,000, but neither party was able to confirm the figure this week.

I don't know why the union can't confirm what it's claiming but an interesting thing I've just noticed is that the headline on line is different from the headline in print: 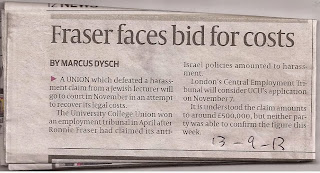