Israel's use of human shields: HRW weighs in

According to Reuters (though the article carries a Reuters disclaimer), Human Rights Watch has followed B'tselem's lead in condemning the Israeli army's use of Palestinian civilians, including children, as human shields:

The Israeli army should immediately cease deliberately endangering Palestinian civilians by forcing them to assist military operations, Human Rights Watch said today. During recent military operations in the Old City of Nablus, Israeli soldiers forced at least three Palestinians at gun point, two of them children, to assist in searching apartments for suspects. International humanitarian law prohibits a party to a conflict from using the civilian population or individual civilians in order to attempt to shield military operations.
"The soldiers' actions fly in the face of the Geneva Conventions, an Israeli high court decision, and the IDF's own prior commitments," said Joe Saunders, deputy program director at Human Rights Watch. "Israel should put an immediate end to this wholly illegal practice which deliberately abuses the immunity to which civilians are guaranteed under international law."According to testimonies gathered by the Israeli human rights organization, B'Tselem, on February 25, on the first day of Israel's military operation in the Old City of Nablus, Israeli soldiers forced two cousins, 'Amid and Samah Amirah, ages 15 and 24, to walk at gun point in front of them as they entered and searched nearby homes. 'Amid also described how the Israel Defense Forces (IDF) used him at his own house at a time when the IDF apparently believed one or more suspects might be inside, as suggested by the fact that soldiers fired shots during the search: "They aimed their weapons at me. One of them pushed me so that I would go into the house first. I went in first, and then the soldiers entered. One of them pushed me to a corner of the room, and then fired into the house. They fired 5-6 shots inside the house. They told me to go into the rooms and then they came in behind me."The soldiers also forced 'Amid's cousin Samah at gun point to enter all the rooms of a house and later fired live shots into the rooms. AP television cameramen filmed and broadcast part of this incident.

Start dusting off those "blood libel" allegations Israel.
Posted by levi9909 @ 9:25 am No comments:

What did Tony Blair know and when?

I'm a bit late with this, I know. It was in Friday's Guardian. I just can't sit down at the pc much these days so my posts (and my hits) are down. Anyway, finally there's been a admission that Israel's bomardment of Lebanon last summer was pre-planned:

Preparations for Israel's war in Lebanon last summer were drawn up at least four months before two Israeli soldiers were kidnapped by Hizbullah in July, Ehud Olmert, the prime minister, has admitted.

Ok, we all knew that anyway, many even said so at the time and no one, but no one, believes anything Israel's spokespersons say anymore. The point that interested me most was raised in the Independent thus:

But the report will fuel claims by some international critics of the operation that Israel, and perhaps the US, had for some time decided in favour of a military confrontation with the Lebanese group.

So the US was in on it. Well of course the US was in on it. The US supplied so much of the weaponry. But so much of the weaponry came through the UK. Perhaps it wouldn't surprise anyone if whole chunks of UK airports lie unused just waiting for an American or Israeli contingency but I suspect America, Israel and the UK colluded in this from the beginning.
Posted by levi9909 @ 8:02 pm No comments:

Leon Rosselson at the Cellar Upstairs 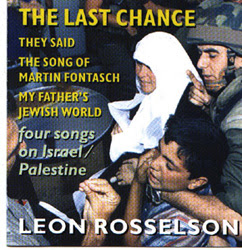 Leon Rosselson is appearing at the Cellar Upstairs tomorrow night - 10 March 2007. The Cellar Upstairs is at the Exmouth Arms, Starcross Street, London NW1 1HR (on the corner of Cobourg Street, near Euston and Euston Square stations). For further details contact Sheila Miller on +44(0)20 7281 7700.
Posted by levi9909 @ 5:21 am No comments:

According to B'tselem in yesterday's Ha'aretz Israel used an eleven year old Palestinian girl as a human shield during its raid on Nablus:

Israel Defense Forces soldiers used an 11-year-old Palestinian girl as a "human shield" during an operation against militants in the West Bank town of Nablus last week, an Israeli human rights group said on Thursday.

The IDF said it was checking the information from the B'Tselem group, which monitors Israeli actions in the occupied territory. Israeli law bans the military from using human shields.

B'Tselem said the girl, Jihan Daadush, told its interviewers that IDF soldiers had entered her family home and questioned her and her relatives about the whereabouts of gunmen who had fired at them during the raid.

The soldiers, she said, threatened to arrest her unless she led them to a nearby house.

Cor! this news just in from Ha'aretz is exciting. Under the headline, Carter stands firm on apartheid accusations against Israel:

He said he was not accusing Israel of racism nor referring to its treatment of Arabs within the country. "I defined apartheid very carefully as the forced segregation by one people of another on their own land," he said.

So while he stands firm on his apartheid analogy regarding the West Bank and Gaza, no doubt he stands equally firm on his stated belief that Israel is a "wonderful democracy."
Posted by levi9909 @ 12:46 am No comments:

The Song of the Old Communist?

Here's a letter from an old communist chap in today's Guardian:

As an 88-year-old who joined the Young Communist League on leaving school in 1936, graduated into the Communist party of Great Britain a few years later, and remained a member until it ceased to exist in 1991, I am angered by the attacks made on it by John Morrison in his letter throwing mud at Eric Hobsbawm (Review, February 24).

When I left school I came up against Mosley fascism and unemployment. As far as Mosley fascism was concerned, both the Labour party and the bourgeois leaders of British Jewry advised people to ignore it and it would just go away. Only the Communists said British fascism must be resisted. Of unemployment, only the Communists explained that it was inherent in capitalism, which must be replaced by socialism. All this made sense; and I joined.

We believed the Soviet Union to be socialist. It certainly had some features of socialism: social ownership, low rents, a state health service and state education. Yes, we made a terrible mistake over Stalin, and we have paid for it. But is the world a safer place without the USSR? The US and its satellite states, Britain and Israel, are pursuing a long-term policy and programme of "perpetual war" for US domination of the world and particularly the Middle East oil region. And now that the USSR no longer exists, there is no state willing or strong enough to resist that drive.

I am proud to have belonged to a party which created the International Brigade, organised by the worldwide Spanish aid campaign, helped push Churchill to launch the second front and has always been at the forefront of anti-fascism.
Hyman Frankel
London

This reminds me that Leon Rosselson has some gigs coming up which I'll announce later today. Actually, I'd better mention now that he has a gig on Saturday 10 March at the Cellar Upstairs at the Exmouth Arms, Starcross St., London NW1 2HR, near Euston Station. Phone Sheila on 020-7281 7700 for details.
Posted by levi9909 @ 8:35 am No comments:

That's a cheeky little headline. It's actually Scottish PSC on Gilad Atzmon but people (including me but excluding him) are sick of seeing him in headlines here. It seems they now regret their hosting of Gilad Atzmon at an event of theirs. This is an excerpt from an article by Mick Napier of SPSC:

Shamir is in perfect solidarity with Gilad Atzmon, and the intense admiration is returned: “What I love about Eisen, Shamir, Blankfort and many others, rather than talking in the name of the Jews they talk in the name of reason and ethics.”* Both Shamir and Atzmon agree that the enemy is not really Zionism itself, but the Jewish essence which creates Zionism. Deriding any notion that Zionism might be a strategic asset of the US and Europe, both see Zionism as inherent in Jewishness, which becomes the main enemy. Shamir uses language that reminds one of the ranting of the person he doesn’t want to “demonise” when he adds in the same article about Gilad Atzmon, that "it is a question of spirit, the Judaic spirit we find at the basis of Zionism."

Griffin-supporter Shamir doesn’t stint in his praise for Atzmon: “Our friends Gilad Atzmon, Paul Eisen and Mary Rizzo are the shining stars of the battle, and they are doing good by defeating the adversary…Gilad takes up the tools of modern philosophical discourse ... to explain our position: why we are against domination by Judaic spirit." In line with Domingo’s “strong and clear voice” asserting that “We must deny the concept of Holocaust without doubt and hesitation,” Shamir gives Gilad a pat on the head, because "Gilad correctly stated that ‘holocaust denier’ is but a Zionist term." Nick “Griffin and of other anti-bourgeois nationalists”, the voices that Shamir says we need, would agree, even though the BNP are attracted to Israel’s militarism and racism. They drool at the Israeli jackboot on the Palestinian neck and one million Israeli/US cluster bombs transported through Scotland and dropped on Arab towns and villages in Lebanon.

This is timely because Gilad Atzmon and co have been rewriting various articles and comments lately with a view to litigation. One of his cohorts recently asked commentors to cool it with the links to known nazis because of the embarrassment this was causing.

It's particularly encouraging that it was someone I believe to be a high profile activist with Respect that pointed me in the direction of Mick Napier's article. Hopefully he will point his SWP comrades in the same direction.
Posted by levi9909 @ 4:16 pm No comments:

The young Palestinian man was dressed in shorts and a T-shirt on a cold winter morning as he walked in front of heavily armed Israeli soldiers on a door-to-door sweep of three apartments in a crowded West Bank neighborhood.

The scene - caught by an Associated Press Television News camera - has raised questions about whether the Israeli army is still using Palestinian civilians during military operations, despite a Supreme Court order barring the practice.

Human rights groups call the tactic a violation of local and international law that places innocent civilians in the line of fire.