Deborah Maccoby, The Jewish Chronicle and a Smoked Salmon Beigel. Is it Friday already?

Aha!  Deborah Maccoby has reappeared on the Jewish Chronicle website letters page.  I blogged about her letter's appearance and disappearance from the JC website a few days ago.   Here's the letter again:

In his Holocaust Education Trust dinner speech (The scourge of antisemitism is changing form, JC, October 20 2017) Andrew Neil erroneously cited the Free Speech on Israel fringe meeting at the Labour Party Conference: “the chair of the meeting asked: ‘We demand the right to debate ‘Holocaust: yes or no’”.
The chair of the meeting, Naomi Wimborne-Idrissi, made no mention of the Holocaust. The guest speaker, Miko Peled, an Israeli-American who is not a member of the Labour Party, said: “This is about free speech, the freedom to criticise and to discuss every issue, whether it’s the Holocaust: yes or no, Palestine, the liberation, the whole spectrum. There should be no limits on the discussion”.
Peled was defining free speech as a principle, not calling for a Labour Party debate about whether or not the Holocaust happened, as was implied by Mr Neil.
Later in his speech, Andrew Neil quoted Mark Twain: “the truth has barely got its boots on before a lie is halfway round the world”.  Exactly.
Deborah Maccoby, Leeds LS17

Apparently what happens at the JC is, on Thursday night the JC print editions get delivered to shops and houses up and down the country.  The date on it is the Friday not the Thursday.  The letters are then loaded onto the website on the Friday bearing that Friday's date and the letters which by now then have all appeared in the print edition.  Well Deborah Maccoby's letter was reproduced in error on the website before it has appeared in print.  Now it is possible that someone at the JC wanted it printed while someone else wanted it pulled but let's just assume that the JC did intend to publish it in today's print edition but published in error on line last week then pulled it and now is pushing it again.

Oi! Now I have to go to Gants Hill to get a smoked salmon beigel and a print copy of the JC.  I'll snap the letters page and post the pic here so watch this space.....

Meanwhile, have a beigel.... 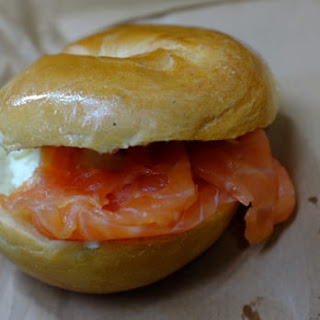 Ok, I had my beigel and two twisted Danishes and bought my JC, £2.50 (ouch!) and here is Deborah's letter taking a good old swipe at Andrew Neil, Orange monster, Tory and Zionist: 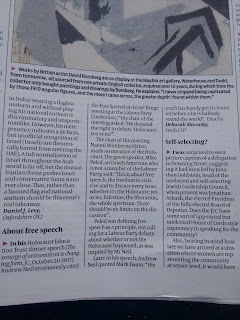 Sorry, I'm not very good at that edit malarkey but well done to the JC for publishing a letter completely out of kilter with their standard Zionist fare.
Posted by levi9909 @ 10:00 am No comments: