Purim is a time of laughter. It is a cross between Halloween and April Fools Day and it was in that spirit that a friend gave me the book because, she said. it's a joke. And so it turned out. I don't even know if Baddiel was joking by writing it. It contains no new insights at all.

It is basically arguing that Jews should be considered an ethnicity or race (Baddiel conflates the two) mostly because the Nazis did. He ignores that it was actually an aspect of their antisemitism that the Nazis posited Jews as a race but Baddiel swallows whole their pseudoscience (p41) and refuses to consider that Jews in free societies have identity choices denied to the essentially non-white BAME communities.

The positive reviews Baddiel's book has received are either sycophancy or collusion especially those that say it is "well researched". It's a bizarre thing to say about a book which consists entirely of Baddiel's own experiences or whatever he has gleaned from Twitter, Facebook, television and newspapers.

If he had have conducted research he might have written a very different book. For example, he has an officer of an Israel advocacy and Jewish security group tampering with a quote (p68) from Ken Loach to make it look as if Loach had said that "history is there for us all to discuss" to promote debate on whether the Holocaust happened or not. 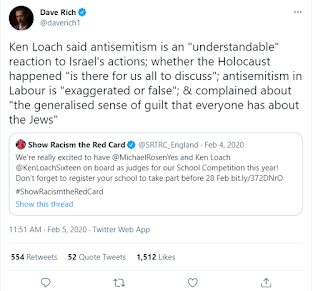 He didn't. And when he replicates Loach's son's tweet (p69) objecting to the defamation of his father and calling Baddiel out on Baddiel's own past racism, 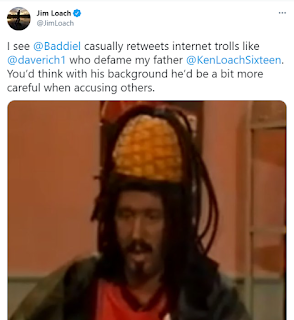 Baddiel's claim to be addressing himself to the "progressive left" by highlighting what he claims are instances of antisemitism on the left is laughable. The progressive left is not Baddiel's milieu and apart from some faked cases, all the examples of antisemitism he gives come from non-left sources. Jenny Tonge (p94) with her LibDem background is a centrist now in the Lords as an independent, ironically since the centre is roughly where Baddiel places himself. Other genuine cases of antisemitism from football club directors (p28) or racist football fans (p13), are likewise not from the left.

The book is  peppered with accidental or deliberate false inferences. Discussion of the case of US Congresswoman, Ilhan Omar, (pp10-12) had him and BBC's Justin Webb accusing her, without evidence, of antisemitism. He wildly exaggerated the notorious Mear One mural of 6 bankers (including 2 Jews) lording it over the suffering masses to claim that the bankers depicted in it had hooked noses (p44) and suspiciously he didn't include a replica of the mural so people could see for themselves. 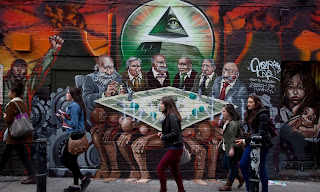 Baddiel concludes MuralGate by patronisingly suggesting that Corbyn sees the anti-capitalism but not the antisemitism (p46). Another false inference. Again if Baddiel did any research he would know that there are many instances of Corbyn placing his opposition to antisemitism before his anti-war and anti-Zionist positions. He condemned Tam Dalyell when the latter said that Blair was in thrall to a "Jewish cabal" of advisers over Iraq and Corbyn condemned the late Paul Flynn for saying that the UK shouldn't have a Jewish ambassador to Israel. The ambassador in question, Matthew Gould, was a declared "proud Zionist".

Baddiel takes the opportunity thrown up by MuralGate to assert that "There is, on both left and right, of capitalist power being represented as Jewish power" (p46). No examples given, no research required.

Baddiel claims to be a "non-Zionist" and yet he appears to support the IHRA working definition of antisemitism (p74) which essentialises Jews as supporters of The State of Israel. He assumes that opponents of the definition don't care about Jews. It appears that Baddiel hasn't read the definition or, worse, he has. He protests (p75) that during a time of unprecedented pressure on universities over Covid19, one university official expressed irritation at, though Baddiel doesn't mention it, a blackmail attempt by a right wing Tory government to defund universities if they fail to adopt a bogus definition of antisemitism which, if adopted and adhered to, would prevent not just criticism of The State of Israel, which it already has, but also accurate description of its character and its history.  But for Baddiel, the failure or refusal of some universities to succumb to the blackmail shows that they don't care about Jews or antisemitism.

In order to falsely accuse the leftish journalist Ash Sarkar of antisemitism he misrepresents her as saying that all Jews are rich. She actually said that unlike racism against other identities the socioeconomic status of Jews is not affected by racism one way or the other. Baddiel even claims to be unable to consider anything other than his own misinterpretation (p26). Again, a lack of research. Why didn't he ask her? Later in the book, because Sarkar used the word "dispossession" in her tweet (p110) about the current situation, Baddiel takes the opportunity to mention his wealthy ancestors as having been dispossessed by the Nazis as if Sarkar was some kind of Holocaust denier. He misrepresents Sarkar three times overall (p120). I'm left with the impression she probably won the argument on Twitter.

Baddiel is a man who has chatted with a PM about a cause of his concern, he met up with Princess Di's lawyer to talk to him for 3 hours about TS Eliot's antisemitism and he had radio 4's Justin Webb contact him to tell him he wasn't advising the Democrats to pitch to antisemitism as Baddiel had falsely inferred. And yet he couldn't even conduct the basic research of contacting people on Twitter to get them to clarify their position before he went ahead and, well, smeared them.

Of course his lack of research wasn't just laziness. It was agenda driven. Why does multimillionaire David Baddiel worry about inflated and invented antisemitism from the redistributive left and not even seem to know about the very real antisemitism of the current PM and some.of his senior cohorts?

This brings us to his nonchalant dismissal of those Jews with whom he disagrees. Like Howard Jacobson before him, he believes Jews who are perfectly, you might say proudly, upfront about being Jewish, are actually ashamed of being Jewish if they criticise Israel or if they are anti-Zionist altogether. Miriam Margolyes comes in for a particularly nasty swipe here (p30). Also, Baddiel seems unaware of a whole swathe of unabashed anti-Zionist Jews in the Haredic and very numerous Satmar and Chasidic communities who he dismisses on Twitter as "stupid fucking frummers" but doesn't mention them in his book unless he's lumping them in with democratic secularists like myself. 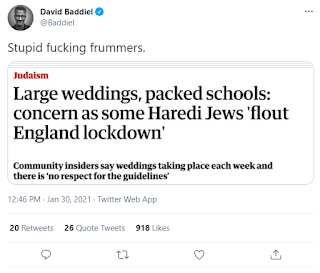 Another thing suggesting his dismissiveness of much Jewishness (Yiddishkeit) is how he treats the Talmud. He dismisses it as a book of exegesis of the Old Testament, codified in the fourteenth century". (p7) It was the 6th century and Old Testament is Christian terminology and a bit of a putdown. He complains that antisemites misquote it to make Jews look bad but a) how would he know? and b) it's not unheard of for Israeli rabbis to embarrass Israel by saying how one day gentiles will be the slaves of Jews.

I really can't see why this book was written at all or why it is being so lavishly praised - including by at least two Tory peers. Ok, I can see why it's being praised by Tory peers and other Rightists. But we have had over 5 years of smears and the progressive left is all but destroyed for a generation. For Baddiel the book seems to be a settling of scores on a platform away from Twitter and real life where his targets cannot have a right of reply. It is cowardly, mean spirited and dishonest.

Shami Chakrabarti has been invited to speak at the prestigious St Paul’s School on the subject of “equality between people” on the occassion of International Women’s Day, despite her role whitewashing antisemitism within the Labour Party.

Following a complaint to us from an appalled alumnus, Campaign Against Antisemitism has written to the High Master of the boys’ school to ask why the disgraced peer has been invited to speak tomorrow, to insist that she is challenged on her role whitewashing anti-Jewish racism in the Labour Party, and to make welfare arrangements for Jewish students and anyone else affected by her address.

All very strange because CAA's partners in slime, so-called Jewish Labour Movement quite liked her report when it was first published:

Reacting to the publication of the Chakrabarti Inquiry report, the Jewish Labour Movement have released this statement:

"This is a sensible and firm platform which gives the Party an opportunity to get off the back foot and on to the front foot in setting a new standard for tacking racism and anti-Semitism.

The report has accurately diagnosed the nature of the problem.  There will rightly be a debate and discussion about the specifics of the very detailed recommendations on rules, regulations and processes.

But all the talk about high standards will need to  be borne out by implementation. This will require strong leadership.

One of the very first tests will be how the party deals with the ongoing disciplinary case against Ken Livingstone. There can be no future for a politician with his track record in a post Chakrabarti report labour party.

We at JLM will be meeting with the party leadership  in next few days to begin discussions around implementation."

All the lies must catch up with them eventually.