Where Are the Barricades CD by Leon Rosselson

THE FINAL RECORDING.  14 songs, mostly from recent years,  ranging from the humorous to the poignant and from the lyrical to the satirical. Stories for our times, musically varied and not a word out of place.

Price: £12
Postage to the UK included in the price.
Buy from my website (www.leonrosselson.co.uk) or send a cheque made out to Fuse Records to 28 Park Chase, Wembley, Middlesex HA9 8EH.
Posted by levi9909 @ 9:17 pm No comments:

From Ha'aretz premium via google cache:

In 2016, one doesn’t have to be Adolf Eichmann to be executed in Israel – it’s enough to be a teenage Palestinian girl with scissors.

An illustrative image of a soldier securing a Jerusalem bus. Olivier Fitoussi

We should call it like it is: Israel executes people without trial nearly every day. Any other description is a lie. If there was once discussion here about the death penalty for terrorists, now they are executed even without trial (and without discussion). If once there was debate over the rules of engagement, today it’s clear: we shoot to kill – any suspicious Palestinian.

Public Security Minister Gilad Erdan outlined the situation clearly when he said, “Every terrorist should know he will not survive the attack he is about to commit” – and almost every politician joined him in nauseating unison, from Yair Lapid on up. Never have so many licenses to kill been handed out here, nor has the finger been so itchy on the trigger.

In 2016, one doesn’t have to be Adolf Eichmann to be executed here – it’s enough to be a teenage Palestinian girl with scissors. The firing squads are active every day. Soldiers, police and civilians shoot those who stabbed Israelis, or tried to stab them or were suspected of doing so, and at those who run down Israelis in their cars or appear to have done so.

In most cases, there was no need to shoot – and certainly not to kill. In a good many of the cases, the shooters’ lives were not in danger. They shot people to death who were holding a knife or even scissors, or people who just put their hands in their pockets or lost control of their car.

They shot them to death indiscriminately – women, men, teenage girls, teenage boys. They shot them when they were standing, and even after they were no longer a threat. They shot to kill, to punish, to release their anger, and to take revenge. There is such contempt here that these incidents are barely covered in the media.
Last Saturday, soldiers at the Beka’ot checkpoint (called Hamra by the Palestinians) in the Jordan Valley killed businessman Said Abu al-Wafa, 35, a father of four, with 11 bullets. At the same time, they also killed Ali Abu Maryam, a 21-year-old farm laborer and student, with three bullets. The Israel Defense Forces did not explain the killing of the two men, except to say there was a suspicion that someone had drawn a knife. There are security cameras at the site, but the IDF has not released video footage of the incident.

Last month, other IDF soldiers killed Nashat Asfur, a father of three who worked at an Israeli chicken slaughterhouse. They shot him in his village, Sinjil, from 150 meters away, while he was walking home from a wedding. Earlier this month, Mahdia Hammad – a 40-year-old mother of four – was driving home through her village, Silwad. Border Police officers sprayed her car with dozens of bullets after they suspected she intended to run them over.

The soldiers didn’t even suspect cosmetology student Samah Abdallah, 18, of anything. Soldiers shot her father’s car “by mistake,” killing her; they had suspected a 16-year-old pedestrian, Alaa al-Hashash, of trying to stab them. They executed him as well, of course.

They also killed Ashrakat Qattanani, 16, who was holding a knife and running after an Israeli woman. First a settler ran her over with his car, and when she was lying injured on the ground, soldiers and settlers shot her at least four times. Execution – what else?

And when soldiers shot Lafi Awad, 20, in his back while he was fleeing after throwing stones, was that not an execution?

These are only a few of the cases I have documented over the past few weeks in Haaretz. The website of the human rights group B’Tselem has a list of 12 more cases of executions.

Swedish Foreign Minister Margot Wallström, one of the few ministers with a conscience left in the world, demanded that these killings be investigated. There is no demand more moral and just than this. It should have come from our own justice minister.

Israel responded with its usual howls. The prime minister said this was “outrageous, immoral and unjust.” And Benjamin Netanyahu understands those terms: That is exactly how to describe Israel’s campaign of criminal executions under his leadership.

On the death of David Bowie and Bob Dylan

Last night, for the first time, I saw Bob Dylan in an advert on either television or YoutTube, I don't remember which.  I searched and found it just now on YouTube.  It's an advert for some IBM product.  Here it is:

Poor fella. He must be broke.

So anyway, this morning a friend of mine woke me with a text message to say "Bowie dead". Now I don't know if Bowie ever did tv or YouTube or any other kind of adverts but I certainly don't remember any. I gave up on Bowie in the mid-seventies when I found his image changes kind of crassly commercial. Dylan on the other hand seemed kind of deep for a time. It wasn't til the late seventies/early eighties I lost patience with him and then I think it was over politics or religion or maybe both.

In all the coverage I have seen today about David Bowie's career he did seem to come across as a man of considerable artistic integrity, except for one low point that he himself alluded to in an interview and that was his disco period. I wonder if Dylan has the same self-awareness.

UPDATE: I've changed the Bob Dylan/IBM video from the short version to the extended version. I had to download the extended and then upload it because it couldn't be embedded. Maybe it'll get snaffled soon enough in which case follow the links.

ANOTHER UPDATE: Tony Greenstein has an interesting take on the passing of David Bowie with a bit of context explaining why he was/is such a hit with the media:


It is noticeable how, in his death, Bowie has been hailed as the ultimate rebel by the BBC and the corporate media.  It suggests that his rebellion was one of style not substance.

The post is subtitled, Ziggy's flirtation with fascism.
Posted by levi9909 @ 10:35 pm No comments:

Are we all about to be Charlie Hebdo again?

I ask because I just saw an article from (I think) yesterday's Observer. I only think it was because it's on The Guardian website and dated yesterday.  The Guardian doesn't seem to do that "article history" thing any more and I don't buy the print editions so I can't be sure if the article was in print or not.  Anyway, the article was by some chap who writes for Charlie Hebdo who is really angry because he claims that the English speaking critics of Charlie Hebdo don't know French.  I don't know who specifically he is referring to or how he knows they don't know French but that's what he claims to be so cross about.

The headline of the article is The scurrilous lies written about Charlie Hebdo.  The subtitle says:


A year after the Charlie Hebdo killings, francophone writer Robert McLiam Wilson deplores the reports in English by the ignorant for the ignorant

Yup, the anniversary of the Charlie Hebdo killings is on 7th January and so Robert McLiam Wilson is getting uptight about Charlie Hebdo's critics.

The thing is he was also similarly, indeed equally, uptight nine months ago in April last year when he wrote pretty much the same article for New Statesman.  That one was titled, If you don’t speak French, how can you judge if Charlie Hebdo is racist?

Now I can well understand this guy's feelings of hurt and anger over the atrocity at the Charlie Hebdo offices. What I don't get is how he can loose off about the knowledge of French (or lack of) of people he doesn't seem to know or name. I also don't get why the Observer or the Guardian was so quick to publish an article so similar to one he wrote only nine months ago.
Posted by levi9909 @ 9:51 pm No comments:

Sorry, that headline was a paraphrase of a joke in Private Eye magazine.  I've just seen these cartoons in The Independent so I thought I'd reproduce them here. 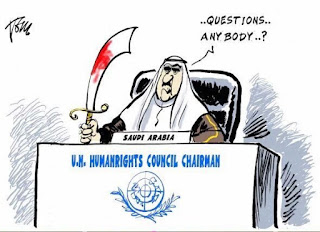 It's from this tweet from someone calling themselves the Power of One or @france7776.

Here's the second from Carlos Latuff: 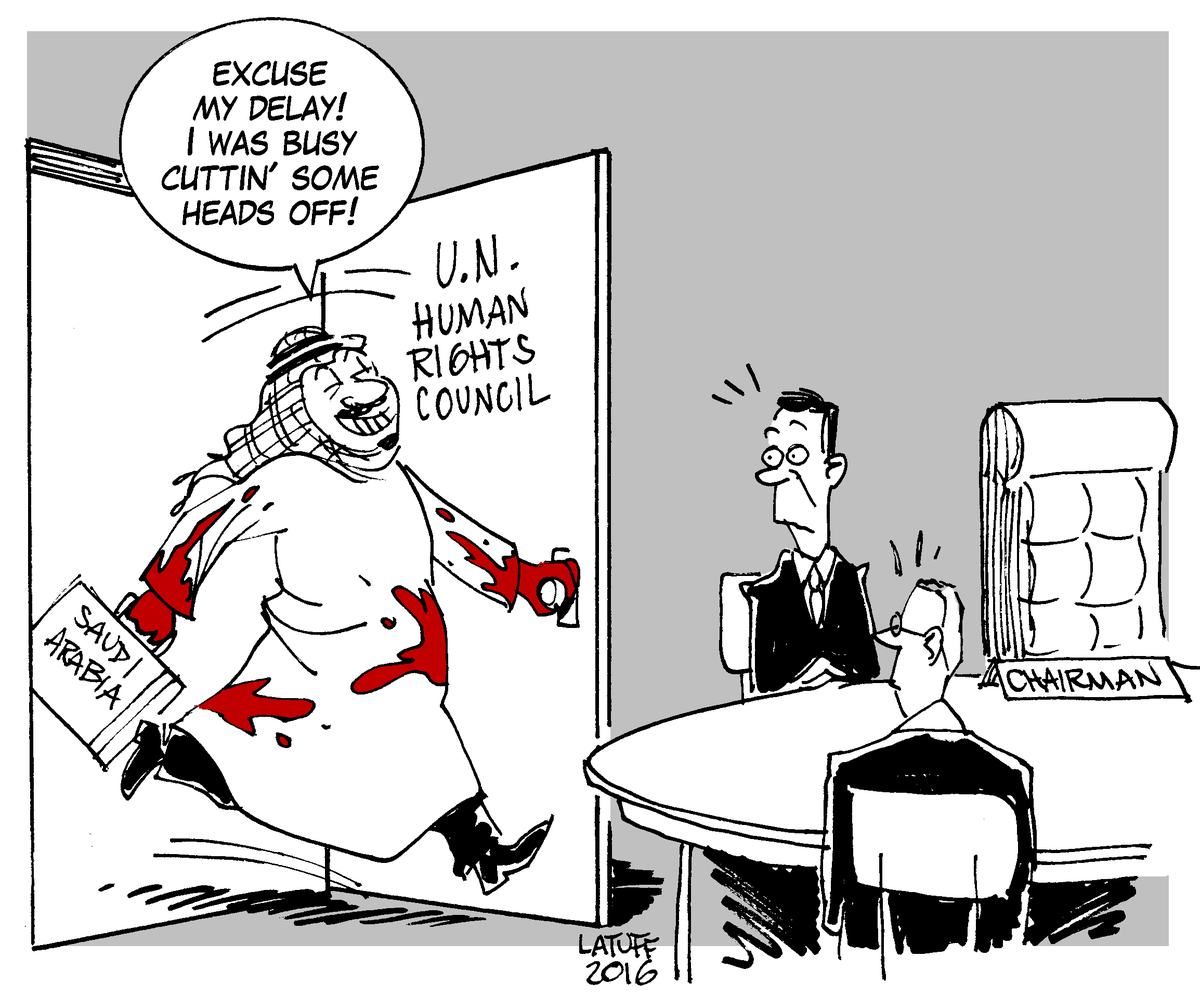 The third is from Nat Shupe:

And the fourth is from Dr Kailash Chand: 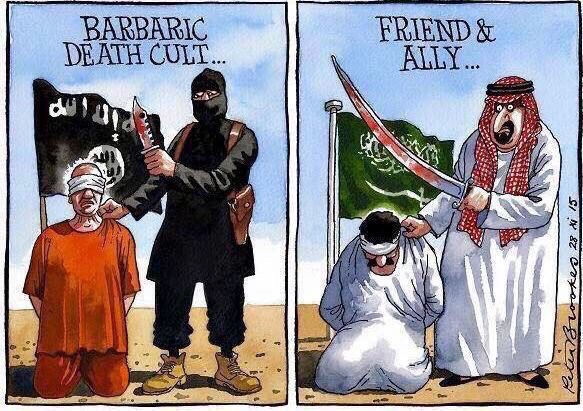 Tony Greenstein has a post on the BBC's coverage of the Saudi executions on his blog.
Posted by levi9909 @ 12:15 pm No comments: