An utterly bogus hasbara piece on The Guardian website titled The Guardian view on the war of knives in Israel and the West Bank and subtitled Editorial prompted an interesting twitter exchange.

Here are some chunks from the editorial:


Off-duty soldiers go jogging with submachine guns slung across their chests. Men and women who have never owned a firearm hesitate at the door of gun shops after the laws on weapon ownership were relaxed. People eat at home, and plan their trips to the supermarket or their bus journeys to avoid the places where the Palestinian stabbing attacks, which have surprised and frightened Israelis in recent weeks, seem most likely.

The issue here is "the Palestinian stabbing attacks" and the Israeli response.  Palestinian actions couldn't possibly themselves be a response.


On the Arab side, parents worry that a loved son or daughter will decide to trade their own life for that of an Israeli, or that a family member will be caught in crossfire.

Not deliberately killed by Israelis simply for being Palestinian.


at the last count, nine Israelis dead, although with more than 60 Palestinians killed as armed Israelis reacted to the attacks or tried to forestall attacks they thought imminent. The Palestinian dead include some who were demonstrators, not perpetrators, some who were killed in error, and some who just got in the way.

Wow, a concession to the idea that Palestinians might, just might, get killed by Israelis simply for demonstrating.

Well it was only a small concession and it was soon marred by this little gem:


For one thing it is hard to imagine that the influence of jihad movements beyond Israel’s and Palestine’s borders has not played a part in inflaming young minds, a development that must be bad news for both Israelis and Palestinians.

He quickly followed up with a question to Jonathan Freedland whose profile page at The Guardian reads:

Just wondering, but perhaps @freedland can provide some insight into how such an 'observation' made it into the editorial.
— Ben White (@benabyad) October 29, 2015

@benabyad nope. Am on holiday for half term this week.
— Jonathan Freedland (@Freedland) October 29, 2015

Then David Aaronovitch appears in the thread:

@Freedland But Jonathan it must have been you because, well, you know.... @benabyad
— David Aaronovitch (@DAaronovitch) October 29, 2015

"Well, you know..", as Ben White points out, it's in Jonathan Freedland's job description and he often opines in The Guardian and elsewhere in favour of Israel.  I'm fed up with embedding, copying and pasting but you can follow the thread for yourself where you'll see that Aaro seems to be saying that there are lots of people at The Guardian with the same JD and who write about Palestine.  But I think there is only one person with the JD which states, that the person in question is the Guardian's executive editor, Opinion, overseeing Comment is free, editorials and long reads and that is Jonathan Freedland.

Now surely that makes it fair to assume that Jonathan Freedland was responsible for an editorial comment at The Guardian or if he's not directly responsible he could "provide some insight into how such an 'observation' made it into the editorial."

He claims that he can't.

Apparently Bibi's dad was a historian. That's according to Anschel Pfeffer in today's Jewish Chronicle. Look:


According to Mr Netanyahu - whose father was a lauded historian - Hitler asked Al-Husseini: "What should I do with them [the Jews]?" He replied: "Burn them."

I don't know if Netanyahu Senior was a zionist "historian" or a historian who happened to be a zionist but clearly Netanyahu Junior is no historian.

But then Aschel Pfeffer is no historian either.  Watch how he stumbles into no-shit-Sherlock territory:


Some commentators said that Mr Netanyahu's words revealed either that he sees the conflict between Israel and its immediate neighbours as a continuation of the Holocaust, or that he is prepared to manipulate history for political purposes.

Norman Finkelstein's The Holocaust Industry is available in good bookshops, at least it was several years ago. It might of interest to wannabe historians like Netanyahu Junior and Anschel Pfeffer.
Posted by levi9909 @ 2:18 pm No comments:

Shooting the Eritrean: What was the "mistake" exactly?

It looked quite deliberate to me:

Email ThisBlogThis!Share to TwitterShare to FacebookShare to Pinterest
Labels: Eritrean

Bibi Netanyahu has made a complete dick of himself again.   Addressing the World Zionist Congress in Jerusalem he said that Hitler had no plans for the holocaust until that British invention, the Grand Mufti of Jerusalem, persuaded him to carry it out.  Here's Marcus Dysch in The Jewish Chronicle:

Benjamin Netanyahu has claimed Hitler only decided to carry out the Final Solution after being convinced by a Palestinian leader.
Speaking at the World Jewish Congress, the Israeli Prime Minister said the plan to exterminate European Jews was developed after the Nazi leader met the Mufti of Jerusalem, Haj Amin al-Husseini.

Of course being written by Marcus Dysch they had to get something wrong. It wasn't the World Jewish Congress Bibi was addressing, it was the World Zionist Congress. Anyone would think that the JC uses the words Jewish and Zionist interchangeably.
Posted by levi9909 @ 1:00 pm No comments:

End the occupation! End the killing!

Email ThisBlogThis!Share to TwitterShare to FacebookShare to Pinterest
Labels: activism 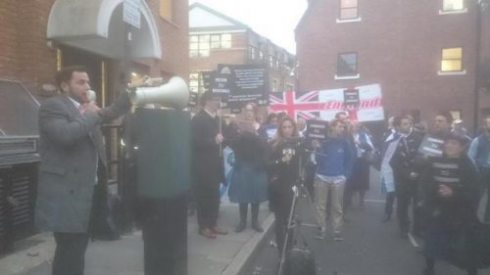 Giving another example of the working definition of chutzpah zionists are demonstrating against the Palestinian mission in London tomorrow under the hashtag #IsraeliLivesMatter.  Here's Jewish News:

A protest has been planned to take place outside the Palestinian Mission in response to the recent wave of violence, writes Jack Mendel.
The event will highlight the role that incitement has played in motivating attacks on Israelis in recent weeks, which has led to four Israelis deaths with hundreds injured across Israel, in stabbing, rock throwing and shooting incidents.
Organised by the ZF in partnership with the Board of Deputies and other cross-communal organisations, the event has been set up on Facebook and on Twitter using the hashtag #IsraeliLivesMatter.


Emergency Counter Protest: Tuesday 13th October 5pm, 5 Galena Road, W6 0LT  The Board of Deputies has called a vigil outside the premises of the Palestinian Mission to protest “Palestinian violence and Incitement”, and has appropriated the anti-racist slogan “Black Lives Matter” to publicise the vigil with the hashtag #IsraeliLivesMatter. Several Jewish groups including the JSG are joining together in a counter protest under the slogan “End the Occupation - End the Killing”, recognising the fundamental role of the occupation in fuelling the current conflicts – and recognising too that the Palestinians are suffering far greater casualties and fatalities. Our counter protest will be at the same time as the Board’s protest, also near the Palestinian mission.Please make every effort to attend.JFJFP are meeting at 4.30pm  outside the Lyric Theatre, King Street, Hammersmith, and will walk to Galen Road from there

I just stumbled on this little gem by my friend Gabriel Ash on Louis Proyect's marxmail thingy:

I've just received an email announcing a vigil at the Israeli embassy in London for Mordechai Vanunu on the day before his birthday.

There will be a vigil for the nuclear whistleblower,Mordechai Vanunu(on the eve of his 61st birthday):

The vigil will call for him to be allowed to leave Israel.

Jews for JC in the JC

I suppose most great religious identities have their schisms.  Muslims have Sunni and Shia, etc.  Christians have Orthodox, Catholic, Protestant and so on.  Well if you read Counterpunch, Harry's Place or the Jewish Chronicle you will know that Jews have been a monolithic bloc throughout the millennia.  Well not any more. Jews are now divided into for or against Jeremy Corbyn and those for Jez even have a letter in the most recent edition of the Jewish Chronicle to proving that they exist. [12:40 pm, 7/10/2015 - I just got a call asking me to point out that there is a semi-formal group calling itself Jews for Jeremy and whilst there is an overlap between its members and the JC letter's signatories, not all if its members signed and not all of the letter's signatories are members of JfJ and not all of the signatories even support Jeremy Corbyn but I thought "for Jez" was convenient shorthand.]

The JC doesn't publish its letters page on line so I'm reproducing the letter here with a link to the Jonathan Freedland article it was criticising.

Dear Sir or Madam:
It must be galling for Jonathan Freedland and those who allege that Jeremy Corbyn is happiest when in the company of holocaust deniers, to find their warnings falling on stony ground.  Their problem is that despite the dog whistles, even they cannot bring themselves to accuse Corbyn of being anti-Semitic. [Friends who are enemies Jewish Chronicle September 17, 2015]
Is it any surprise that the combined efforts of the Jewish Chronicle, Daily Mail and Board of Deputies have had no discernible effect?  Why should someone who has spent his parliamentary career opposing racism develop a soft spot for holocaust denial?  This is just another case of accusing anti-Zionists and supporters of the Palestinians of being anti-Semitic.
Jeremy Corbyn has answered these allegations repeatedly, in the Jewish Chronicle, The Guardian and elsewhere but Freedland and yourselves aren’t interested in explanations but in trying to get mud to stick.
According to Freedland “…15 years ago he attended meetings of a group called Deir Yassin Remembered, founded by Holocaust denier Paul Eisen.” Since Eisen didn’t reveal himself as a holocaust denier until 2004, Jeremy Corbyn and the many others attending a fund-raising concert in 2001, including rabbis and MPs, would have had to have had psychic gifts.  All these allegations rest on the word of a self-confessed holocaust denier.
What is particularly ironic is that the JC's editor, Stephen Pollard, has said of arch anti-Semite Polish MEP Michal Kaminski: ‘It would be harder to find a greater friend in Brussels.’  (JC 9.10.09.).  Kaminski was leader of the European Conservatives and Reformists in the European parliament, a group initiated by Cameron and to which the Tories continue to ‘belong’.  He combines ardent Zionism with opposing a national Polish apology for the burning alive of 300 Jews in Jedwabne in 1941.
Notwithstanding the Jewish Chronicle’s campaign, thousands of Jews voted for Corbyn.  These so-called ‘community’ leaders do not speak for British Jews who are critics of Israel, oppose the Occupation, or support secular, rather than faith schools. We have no recollection of participating in any democratic process to elect them.
Yours faithfully,

In case you're wondering, the letter was published in full much to the surprise of its signatories detailed on Tony Greenstein's blog.
Posted by levi9909 @ 11:50 pm No comments:

So Jeremy Corbyn addressed a Labour Friends of Israel fringe meeting a couple of nights back.  I haven't managed to find a transcript of his speech though I have seen three reports in Jewish News,  The Jewish Chronicle and The Daily Telegraph.  The last of those helpfully linked to a 4 minute, 27 second long video of the speech that was reported to have been 10 minutes long:


The video was made and uploaded by a Shlomo Anker for which Jeremy Corbyn duly thanked him on Twitter.