Geoffrey Alderman on JEWS WHO TURNED AWAY KINDERTRANSPORT KIDS

Here's another article by Geoffrey Alderman in the Jewish Telegraph which, like the previous one will probably be overwritten by the next.  So off to the Wayback Machine go I and I'm posting the article here too.

The original of this article can be seen at the Wayback Machine.
Posted by levi9909 @ 9:41 pm No comments:

I'm sad to say that The Jewish Telegraph website is a cheap and not very cheerful affair. I don't know if they maintain an archive but I couldn't find it if they do. Geoffrey Alderman came to the defence of Jeremy Corbyn just recently in the article you see below. He wrote another similar one in The Spectator. I just wanted a quick reread of the Jewish Telegraph article but, alas, it has now gone. This is the url for the original article https://www.jewishtelegraph.com/alderman.html. Click it now and it takes you to his latest article with no pointer to his previous stuff.

Well thank goodness for the Wayback machine.  The Wayback machine is a way of archiving web pages that you think might change or disappear. Simply take a web page's url and paste it into the box marked "Save Page Now" and Wayback saves the page as it was when you do it.  Well as luck would have it, someone did just that with this https://www.jewishtelegraph.com/alderman.html.  And so I can bring you this:   https://web.archive.org/web/20190419203707/https://www.jewishtelegraph.com/alderman.html

It is the only Jewish Telegraph page ever saved to the Wayback machine, so far anyway.

So now, if you see a web page that you think is going to disappear or change and you want the original, screengrab and archive in the Wayback Machine.

You will have seen or heard another antisemitism smear of Jeremy Corbyn doing the rounds about how he blurbed a book called Imperialism by J.A. Hobson.  The book contains a an antisemitic reference to Jews by way of an ugly stereotypical description

Here is the BBC Radio 3 Podcast of a discussion between a Professor Cain and Tristram Hunt on the now notorious book, Hobson's Imperialism.

Anyway, my typing is very poor so it took me forever to type this because there are some people who ought to know better and indeed do know better trying make out that the antisemitism is central to the thesis and that Professor Cain and Tristram Hunt said as much in the podcast.  Needless to say, they didn't.  They said the opposite.

Tristram Hunt:  Here we see a cartoon in front of us from the Illustrated London News of top-hatted city gentlemen throwing their hats into the air and it says "The reaction on the Stock Exchange to the news of the Boer surrender at Paardeberg 1900".   But there's rather an interesting figure on the far right of it, isn't there?

Professor Cain: Well there's a figure who is clearly drawn as a kind of Jewish financier if you like. And there's no doubt about it that Hobson was quite ambivalent about this side of financial imperialism.  He did show some kind of antisemitic strain.

Tristram Hunt: And the figure we see before us is physically larger than the others. There's the crooked caricature Jewish nose, sideburns and he's not celebrating, he's overlooking it as if to suggest "well this was all in the plan". And is this meant to be in a sense a symbol not so much of a Rhodes as of a Rothschild?

Professor Cain: Yes, I think so and I think the implication is that, although Rhodes is a very prominent figure, it's the senior men in The City who are fundamentally in charge of this operation, this imperialist operation.

Tristram Hunt: Surely there was more than enough to critique in the imperial project and its links with The City without going down the semitic [sic] route.

Professor Cain: [This is at 9 minutes in]  Yes, I think it was a mistake.   What it reflected is the very widespread antisemitic sentiment amongst English intellectuals at that time.  But the fact is that the theory worked perfectly well without invoking any kind of Jewish conspiracy.  What you have fundamentally is what Hobson thinks of as a City conspiracy, not a Jewish conspiracy as such and the theory will work perfectly well without introducing the antisemitic element.

Tristram Hunt: Either way when we look at the power on display at the Stock Exchange and we look at the politicians, the financiers behind the imperial project it suggests some of the strength of the consensus that Hobson was up against, doesn't it?

A Day in the Life of Hobson's Imperialism on Wikipedia

In common with many people when I woke up yesterday I noticed yet another manufactured antisemitism scandal was in full swing. I knew it was manufactured because of the prominence of the words "antisemitism" and "Corbyn" in the headlines.

It turns out that Corbyn wrote an introduction to a book called Imperialism by a chap called Hobson.  I'd never heard of the book, described by Corbyn, apparently. as "brilliant".  It was The Times's Daniel Finkelstein who led the charge yesterday, typically for the antisemitism smears, the day before local elections. 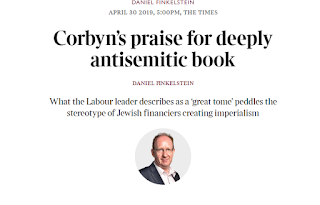 It didn't take long for the poison to spread throughout the media. The words "peculiar race" popped up as the unambiguous description of Jews in Hobson's book.  In one of the anti-Corbyn threads someone very helpfully gave a link to a searchable copy of the book (without Corbyn's intro) online.

Good old Marxists.org.  They have a searchable copy of the book right here: https://www.marxists.org/archive/hobson/1902/imperialism/index.htm

There's only one throwaway reference to Jews by way of the words, "peculiar race" and they're so buried as to be barely even "peripheral" to the entire book. That's me moaning that I now have to search every chapter to then search the words I'm looking for.  The fact is, it is a deeply antisemitic throwaway passage but not a deeply antisemitic book.

So, go to Chapter IV and search for "peculiar" and what do we see:


These great businesses – banking, broking, bill discounting, loan floating, company promoting – form the central ganglion of international capitalism. United by the strongest bonds of organisation, always in closest and quickest touch with one another, situated in the very heart of the business capital of every State, controlled, so far as Europe is concerned, chiefly by men of a single and peculiar race, who have behind them many centuries of financial experience, they are in a unique position to control the policy of nations. No great quick direction of capital is possible save by their consent and through their agency. Does any one seriously suppose that a great war could be undertaken by any European State, or a great State loan subscribed, if the house of Rothschild and its connections set their face against it?

Again in common with a great many people I had to google "Hobson's Imperialism" because I'd never heard of it and out came Wikipedia on top. I noticed it had sections on its influence on Liberalism and its influence on Marxism but nothing about its antisemitism.  Very strange given its description in "newspapers of record" like The Times and The Guardian as a "deeply antisemitic book".

Now I remember from the great Zio "controversy", Zionists are quite adept at creating a controversy out of nothing and then zipping over to Wikipedia to have a bit of a tamper.  When I first noticed Zionists complaining that the word "Zio" is a putdown for Jews as Jews I googled "Zio". Lots of Italian restaurants popped up because Zio is Italian for uncle. I checked Wikipedia and found in the disambiguation that Zio was coming in at the botttom. A quick check of the edits and, what do you know? Zio as a "pejorative abbreviation of Zionist, often regarded as antisemitic" only appeared at the bottom of a list on 15 March 2016.  The "controversy" began in February of the same year. I think that might have been the actual start of the smear campaign.

Anyway, so I dashed over to Wikipedia to see what it had to say about Hobson's Imperialism.  Here are the contents of the page I saw early yesterday:

Today I looked again because the Hobson's Imperialism controversy is still rumbling on and, what do you know?  Look at the contents now:


See what the smear merchants did there? They've inserted "Antisemitism".  Now, let's see what the entry on Hobson's Imperialism lacked for the past 14 years:

[edit]Hobson's antisemitic views have been described as influential,[11][12] and while Imperialism does not contain the "violent anti-Jewish crudities" of his prior works,[13] it asserts that Jews dominated international finance in Europe.[14][15] According to history professor Norman Etherington this section on financiers seems irrelevant to Hobson's economic discourse, and was probably included since Hobson truly believed it.[16]


It's very scrappy, isn't it? Let's check the edits history.

I hope you can see that ok but what happened is, I looked at the page first thing yesterday. There was nothing about Hobson's antisemitism nor the one passage in the book Imperialism that was antisemitic.  Yesterday was 1 May 2019. The last update to the page was 30 April in the evening but it had nothing to do with antisemitism. So sometime yesterday when lots of people were starting to realise that Danny Finkelstein's scoop was yet another rightist fantasy, someone calling themselves Icewhizz decided they had better take notice of what no-one had noticed on a Wikipedia entry in 14 years of edits, re-edits and de-edits.

Well, I suppose we are lucky that Zionism is racism or Zionists might start to notice that the "lower races" of Africa and Asia get more mentions than the "peculiar race" which gets just one mention in the fourth chapter of the book.
Posted by levi9909 @ 3:08 pm No comments: