Voice of peace from Kiryat Shmona

These pictures have been doing the rounds for a while now and they appear on many websites. 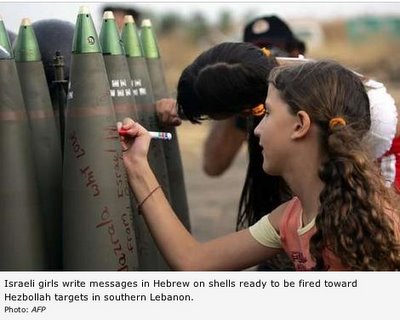 The same sites show the result of these signed "gifts" from Israeli children. 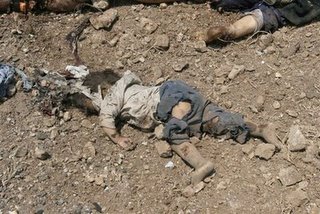 First of all the two girls are from kiryat shmona so they have spent their entire lives in bomb shelters so i thinks its resonable to be angry with the hizbullah.They are writing messages to nazrallah not to the children of lebanon.And one other thing the arab children are consatntly being shown in homicide bomber outfits and at hamas railies but somehow the left seem to have little outrage about that.

This led to the following response from my friend Inbar Tamari:

I'm really pleased that Gillian Henderson is concerned for the welfare of children in my home town of Kiryat Shmona. This of course will be ensured by teaching them to hate the children of Lebanon -- who are the main beneficiaries of these gifts from their Israeli neighbours. Bur these children are apparently not worth Gillian's concern.

I grew up in Kiryat Shmona until I was 18, and I did spend time in shelters, and was often evacuated; the girls in the photo were presumably born after the end of regullar shelling, and have only suffered from occasional attacks, always in response to a delibarate Israeli provocation. I never thought the answer is in hating the other side. During 82, when I was 18, I volunteered to help in the bomb shelters and I often heard ordinary, working class people linking and anticipating the Israeli bombing of Lebanon with the bombs they would suffer later. It is simple and populistic to fan hatred, it is much more time consuming and less rewarding to fight for understanding. In 82 there were many peace demos in Israel, including in Kiryat Shmona, by some people, including my family and some of my friends, who believed in talk rather than war. What these girls were doing was not the instinctive behaviour of people from Kiryat Shmona; it is taught behaviour, part of the construction of a common enemy.

I got the pictures from Lenin's Tomb but, as I said, they're all over the net, though I have read complaints that you find them on the BBC site.
Posted by levi9909 @ 6:23 am