Israel's surgical strikes have Engage on a Downer 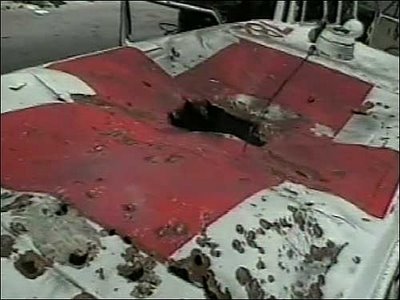 I already said that the bombardment of Lebanon caught the whole of the zionist movement with its collective hand in the till when, with one voice, they all supported Israel's slaughter of Lebanese civilians and destruction of civilian infrastructure. Engage was a classic example of pretend leftists going all out to support these racist war criminals.

So the headline. Private Eye ran a cartoon of an ambulance or maybe a hospital having been bombed by Israel. The caption read "surgical strike." Well Engage recently ran the above picture of a bombed ambulance with a link to an article, on a lunatic zionist website called Zombietime, that claims that Israel didn't bomb the ambulance in the picture. It's very hard to know if the Engage buffoon-in-chief, David Hirsh, really fell for the Zombietime lie or if he knew it was a lie when he posted it. What happened to expose Zombietime was that the Australian foreign minister, Alexander Downer, like Engage these days, will say anything to defend the racist war criminals of the State of Israel and to smear their opponents so he ran with the Zombietime denial. So Mr Downer denounced the Australian media for reporting that Israel had bombed ambulances. His source for the denial was Zombietime. This had the Australian demonstrating what Downer said they should have done before running the story and this is what it came up with:

Downer finds the blog to be a compelling condemnation of the foreign media's competence and ideological stance in Lebanon. Key planks of zombietime.com's allegations are that a missile would not cause the type of damage done to Ambulance 782; rust around the damaged roof showed the damage was done some time prior; neither driver was seriously injured; Shalin's injuries seemed to heal miraculously; and the Israeli apology was merely a matter of course.

I was in Tyre on the night of the attack and investigated the incident closely the next day. On July 24, with photographer Stewart Innes, we spoke to Qassem Shalin, who was recovering from a minor wound to his chin that nurses had bandaged to stop it from turning septic. We also visited Ahmed Mohammed Fawaz, whose lower left leg had been amputated and whose severe burns ironically had saved his life by sealing blood vessels and arteries. His son writhed in pain nearby, his stomach riddled with shrapnel and the rear of his scalp opened up.

We inspected both ambulances, whose mangled roofs were not rusting at the time. By the time the photos used on the blog site were taken, rust had appeared. But this is entirely normal in Lebanon's sultry summer climate, where humidity on the coast does not drop below 70per cent.

He is wrong. The damage done was consistent with ruined cars and vans that I saw elsewhere in Lebanon and earlier in Gaza, which had been hit by a missile fired from a drone. The Israeli-made drones have many types of missiles, but the most regularly used has a small warhead designed for use in urban areas. It aims not to kill anyone outside a small zone and rarely leaves a calling card outside its target.

Downer and Parkinson should know this. The Australian Government last year signed a deal to buy drones from Israel. They would surely have come with a buyer's guide.

The small warhead partly explains the driver's lack of serious wounds. But more telling is the fact that Shalin was lifting the rear ramp of the ambulance when the missile hit. His colleague was stepping into the side door. The concussion wave from the missile easily dispersed through the open spaces. Shalin was protected as he fell under the ramp. The other driver was blown out the side door.

Working in the Lebanese Red Cross operations room in Beirut the night the ambulances were hit was field manager George Kettaneh. "Every ambulance that moved in Lebanon I had to know about," he said. "I received phone calls from the ambulance drivers and it took us one hour to negotiate a ceasefire through the ICRC."

The man doing their bidding for them was Antoine Bieler, the field co-ordinator for the ICRC who yesterday confirmed to Media that he had negotiated a ceasefire with the Israeli Defence Force. "Yes absolutely, that happened," he said from Beirut. The ICRC in Geneva later said there was nothing to support Downer's claim that the events of that night were an anti-Israeli hoax.

I returned to Tyre on Saturday to speak again to Qassem Shalin and inspect the damaged ambulances. "Everything I said happened that night did happen," he said. "There was not a sound in the sky before the explosions. And after that there was a battle for the next hour. We hid in a building nearby convinced we were going to die. It was only when George (Kettaneh) called me that we could leave safely."

The events of July 23 and the reporting that followed was newsworthy and important. The ICRC has documented two other occasions when Lebanese ambulances were hit during the war and to report the incidents does not reflect anti-Israeli bias. The blog site's attempts to create a smokescreen around a shameful truth fail on tests of scrutiny that Downer was happy to overlook.

Beyond serious dispute? Only if you want to believe it, Minister.

Or Doctor, in David Hirsh's case.


UPDATE - Whilst writing this post I see that Deborah Maccoby has now posted the links to the Australian to the comments on the Engage site. Will Dr Hirsh do the decent thing and post the links with the article or will he ignore them? I'm not taking bets on this, I'm just asking.

These are the links: