Like me, David Aaronovitch moderates the comments on his site. So if a zionist feels like libelling an anti-zionist on the Aaro-site, Aaro himself has to take responsibility, especially if the person being libelled is a lawyer like say, Tony Greenstein. I remember seeing something by this Michael Ezra chap in the comments to a ludicrous article by Aaro "about" Jewish anti-zionists and how we don't like our parents. Really, he wrote that. "Mikey" (for it is he) said something about Tony intimidating Jewish students for 30 years. Aaro obviously thought that that was a fair enough comment so he moderated it through. Well Tony wasn't having that. If you're quick you can see Aaronovitch's apology on his own Times site. If you're not so quick or you don't want to give the Times or Aaro your clicks you can see this screen grab here: 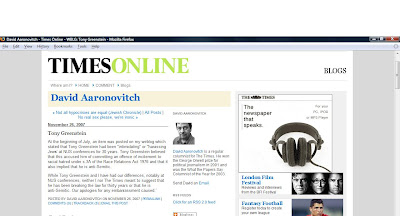 And if you click on the image you can even read what it says. And if you can't do that, here's what it actually says:

At the beginning of July, an item was posted on my weblog which stated that Tony Greenstein had been "intimidating" or "harassing Jews’ at NUS conferences for 30 years. Tony Greenstein believed that this accused him of committing an offence of incitement to racial hatred under s.3A of the Race Relations Act 1976 and that it also implied that he is anti-Semitic.

While Tony Greenstein and I have had our differences, notably at NUS conferences, neither I nor The Times meant to suggest that he has been breaking the law for thirty years or that he is anti-Semitic. Our apologies for any embarrassment caused.

And that's not all. Apparently they're making a donation to the charity of Tony's choice which happens to be Friends of Bir Zeit Uni.

I do love a happy ending. But what about me? Aaronovitch said my dad's a zionist. Really, he said that, or something like that.
Posted by levi9909 @ 9:31 pm