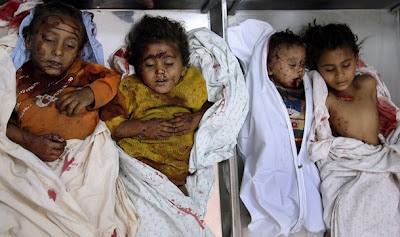 Israel has wiped out yet another Palestinian Arab family according to Reuters. But the child killers have explained why it's ok.

Israeli fire hit a house in the Gaza Strip on Monday while a family was eating breakfast, killing six Palestinians, including four children and their mother, residents and medical officials said.

"They have wiped out my family," said the children's father, Ahmed Abu Meateq, putting his hands on his head in despair and weeping as the bodies were prepared for burial.

The Israeli army said aircraft fired at two Palestinian militants near the house who were carrying bags.

Based on the size of the resulting explosion, the army said it now believed that those bags were filled with bombs and other explosive devices.

"As a result of this big explosion, extensive damage was caused to a house that was near the gunmen and uninvolved civilians were hit," the army said in a statement.

The deaths in the northern Gaza town of Beit Hanoun cast another shadow over Egyptian efforts to forge a ceasefire between Israel and militant groups and end violence threatening U.S.-brokered Palestinian statehood talks.

"This aggression does not serve efforts being exerted to achieve calm, and it obstructs the peace process," Palestinian President Mahmoud Abbas, referring to Israel's military activities, said in a statement carried by WAFA news agency.

There you go, it's the Palestinians' fault, that's why it's ok. And by the same reasoning random attacks against Israel are justified because Israeli gunmen operate among civilians. Kill say 5 or 6 Israelis at random and some are just bound to be racist war criminals.