I enjoyed Mike Cushman's letter in today's Independent so much I clean forgot to take a look at Jews sans frontieres before posting it below this. If had have done so I would have seen the wonderful news brought to JSF readers by one of JSF's contributors, David Landy from Dublin. I'm a little anxious that the passing trade, you know, once off visitors, might not scroll down to the earlier post and a direct action event is a little bit more important than a letter in the press, I'm sure Mike would agree.

Great news. The Raytheon 9 are free! These are 9 activists who trashed the Raytheon building in Derry because Israel used Raytheon weapons in the Lebanon war. It's a great victory. It gives heart to a lot of people on this island to undertake more direct action, but it should be recalled that it was a british jurisdiction - so on ye go! 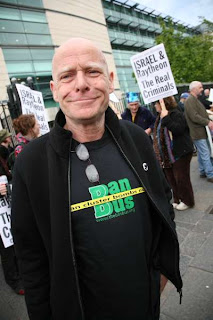 On a sombre note, they dedicated their victory 'to the Shaloub and Hasheem families of Qana in Lebanon, who lost 28 of their closest relatives on the 30 July 2006 due to a Raytheon ‘bunker buster’ bomb.'