Many thanks to Joe90 for drawing Just Peace UK's attention to this post on Lenin's Tomb: 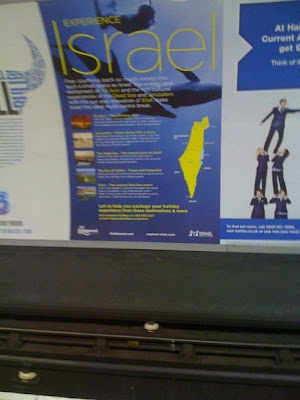 Oh, I just clicked a link on the Tomb post and it took me to the different perspective blog where the blogger is encouraging people to write to the Advertising Standards Authority who, on past performance over a similar issue with the State of Israel, won't take any action.

I say that because a few years ago, I can't remember the medium used, but Israel started an advertising campaign for tourists using the Dome of the Rock to promote Jerusalem. The Advertising Standards Authority, which "works to keep advertising legal, decent, honest and truthful", got many complaints and took no action. I can't remember their excuse for allowing Israel to use occupied territory to advertise "Israel" but they certainly thought they had one, hence no action.

By the way, the different perspective blog got the story and the campaign call from the Palestine Solidarity Campaign.

UPDATE: Dan Judelson has a cautionary email on the Just Peace UK list. Apparently, in possible anticipation of complaints, if you actually see the poster, rather than a photo of it, you can see thin white lines demarcating (maybe) the occupied territories except for the Golan Heights. If you write, they may try to get Israel off the hook by mentioning the white lines but they don't have that excuse for the Golan Heights.
Posted by levi9909 @ 8:14 pm