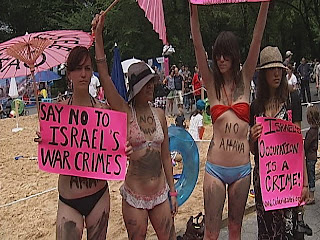 See, this is what happens when you spend millions trying to "rebrand" your image as a fun, beach-going, leisure society, rather than being the land of apartheid, seige, house demolitions, growth-stunting, land theft & shooting phosphorus at schools. Someone is bound to flip your paradigm on its head and use it against you. That's exactly what several bikini-clad women from CODEPINK did yesterday. This Fox 5 NY story on the Israeli Foreign ministry's attempt to show New Yorkers that life's really a beach in the Holy Land became almost entirely about the skimpily-attired protestors -- and on the local FOX affiliate, no less: 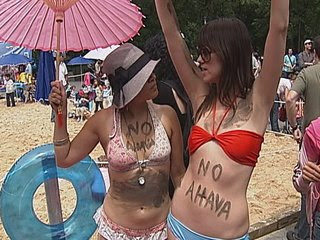 Bikini-clad activists from the women's group CODEPINK covered themselves in mud and stood outside the Israeli Ministry of Tourism's Tel Aviv Beach party in Central Park on Sunday.

The beach was complete with games, tanning spots, and a rock concert.

The protest grabbed attention as they chanted, "Tel Aviv - you can't hide, we can see your dirty side!" CODEPINK states the mud they covered themselves in was to represent the "dirty policies Irsrael holds towards Palestine."

Try best they can, it's tough to shed the bellicose image Israel has managed to accrue. A photo caption in a YNet article last Dec. 20 announcing the beach event ominously inquired:

More photos here. For extra credit: Why Israel's campaign to rebrand its image is doomed to fail.

UPDATE: CODEPINK explains why they've scrawled "Ahava" on themselves.
Posted by Nedster @ 7:35 am