According to a Hebrew-language newsite Mako.co.il June 9, Israeli chanteuse Dana International was livid after the recent cancellation of gigs in Spain and Turkey. International had been scheduled to perform at the European pride festival in Madrid. Then Israeli commandos slaughtered nine Turkish activists in the assault on the Turkish seige of Gaza-breaking aid ship Mavi Marmara, prompting global revulsion, protests, and stepped-up BDS activity:

"After what has happened, and as human rights campaigners, it seemed barbaric to us to have them taking part," Antonio Poveda, president of Spain's Federation of Lesbians, Gays, Transsexuals and Bisexuals, told the British daily The Guardian. "We don't just defend our own little patch."

Poveda told the French news agency AFP that because Tel Aviv Mayor Ron Huldai had not condemned the attack, the invitation would be withdrawn. The float was sponsored by the Tel Aviv municipality. (JTA, June 14)

Incensed by the cancellations, International decided to rally round the troops. From Mako (Google translation a bit rough):

"Dana was offended, angry Dana, Dana did not shut up"

Performances by Dana International in Spain and Turkey were eliminated, but is not going to shut up. Tomorrow she will stand for an interview with foreign media print shirt wearing a symbol of the IDF, in solidarity 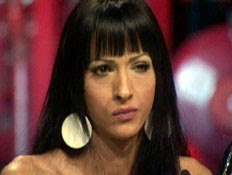 "The army soldiers are above everything."

"Dana is very offended, Dana angry, the first time she encountered such a thing," says Shai Kerem, personal administration of Dana International, after her impressions in Turkey and Spain were set months in advance were canceled, apparently due to the situation of Israel's new community International.

"Dana was supposed to appear in Spain at the Pride Parade which is very disappointing," adds Kerem. "We must not forget that this is also an economic injury, and of course a professional hit, and emotionally. She then appeared there before, then suddenly not? This is an unpleasant feeling and hope that murky cloud will disappear and so the following performances."

I can tell you that it will not pass in silence," [said Kerem]. "Tomorrow arrives a Dutch television crew to do a story about the night life of Tel Aviv and Israel, yes it happens now. Dana, who always goes with her truth, will stand for an interview tomorrow with a special T-shirt printed with the IDF logo and she will be photographed with that. To say that as far as she is concerned the Israeli army is beyond all political debate. The soldiers and the army are doing the work for all of us and they are beyond all controversies. "

Unfortunately I haven't been able to locate a picture of International in her IDF shirt. Given the rising global outrage at Israel's behaviour, such a sartorial choice may not have been the best PR move, lest she find herself getting further cancellations. But it reflects the rising wave of jingoism amongst Israelis, 91% of whom favor military interdiction of the impending further seige-breaking flotillas. International's taking part in Israeli government-sponsored gaywashing of Israel's repression of Palestinians made her a legit boycott target.

Further reflections on what happened in Madrid from Ali Abunimah can be seen at his blog. See also this Oct 1, 2009 article on a Palestinian queer activist in Ha'aretz, "'Stop using Palestinian gays to whitewash Israel's image."

And check out Palestinian Queers for BDS

Israeli Government Out of Our Film Festival!

For the first time since 2007, the Israeli Consulate is a sponsor of the San Francisco International LGBT Film Festival. Queer communities have been targeted by the "Brand Israel" campaign as a receptive audience, and a useful cloak for Israel's oppressive policies. But we are not so desperate for acceptance that we will ally ourselves with racists and murderers.

And in Toronto, LGBT leading activists are now in "open revolt" against the organizers of that city's pride events, after the organizers succumbed to pressure to bar Queers United Against Israeli Apartheid (QuAIA) from participating in the parade, because of their use of the phrase "Israeli apartheid."Muzzlewatch has the latest as of June 11.

Lastly, if anyone should come across that picture of International in her IDF T-Shirt, I'd be much obliged. & if anyone can clear up the Hebrew Google Translate above, that'd be fabulous.

UPDATE: 6/20 Thanks to an Israeli reader, we now have evidence that Dana did not disappoint. In a recent appearance on "Israeli Idol," as one of the judges, Ms. National indeed appeared proudly sporting an IDF t-shirt. Here's a couple screenshots: 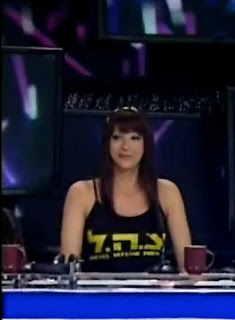 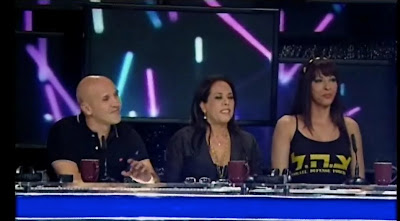 Click on the right-hand pic to enlarge, and "Israeli Defense Forces" in English can be clearly seen under the Hebrew letters for IDF (Zadik, Hey, Lamed, aka, "Tsahal") on Dana's shirt.

The hasbara outfit "Israel 21c," which describes itself as a " nonpolitical, nonprofit organization that informs Americans about 21st century Israel, its people, its institutions and its contributions to global society," and has partnered with the Israeli Foreign Ministry and with AIPAC, reported June 10 that International is taking part in an all-Israeli "rock against the boycott" concert:

In a column she wrote in today’s Yediot Aharonot, Dana expressed regret at the cancellations, both her own and those of the foreign artists who bailed, and said that music and politics should not be mixed.

She added, however, that there’s enough major talent in Israel without any help from abroad, and jumped aboard a planned gala concert later this month at Park Hayarkon or Rabin Square initiated by the Culture Ministry and featuring the country’s top performers to specifically prove that point.

International's comment about how music and politics shouldn't mix brings to mind Elton John telling his Israeli audience that musicians "don't cherry-pick our conscience" while playing his boycott-busting concert there recently, as noted by David Hirsh of the anti-boycott Engage site. Apparently playing Sun City during S. Africa's apartheid regime and performing at the recent wedding of the homophobic, racist blowhard Rush Limbaugh (for a million bucks) didn't prick Elton's conscience either, if that's any consolation to Hirsh.
Posted by Nedster @ 11:01 am