From the International Jewish Anti-Zionist Network 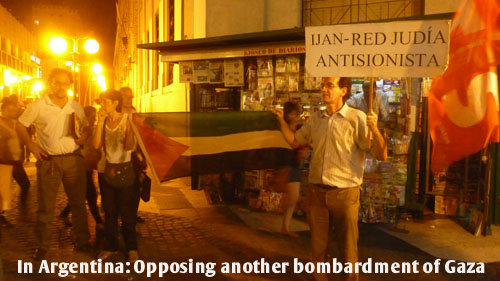 As we enter 2013 this bulletin leads with what's going on in the world and in IJAN. It then provides a report back from IJAN’s participation in the US-Canada Joint Struggle delegation to the World Social Forum Free Palestine (WSFFP) in Porto Alegre, Brazil, and the release of IJAN’s 28-page exposé, Israel’s Worldwide Role in Repression.  There are also updates from the campaign to Stop the Jewish National Fund (JNF) as the January 2013 Plant-a-Tree delegation departs for Palestine, and from campaigns around the world supporting boycott, divestment and sanctions against Israel.

The first thematic World Social Forum to focus on Palestine sustained pressure from the forces that shape the demands of the Palestinian struggle writ large. Israel, Zionist organizations in Brazil, Brazil’s reliance on Israel for military purchases, and the Palestinian forces that play favour to state power over the demands of the people they represent all influenced the forum. The uncompromising voices of younger Palestinians at the WSFFP were reflective of the resilience and resistance of the Palestinian will for liberation. The US-Canada delegation to the WSFFP participated with the intention of building international joint struggle in concert with the Palestinian popular movement. IJAN is working to use the exposé, Israel’s Worldwide Role in Repression, and related popular tribunals to contribute to our on-going movements for justice and liberation.


Comments on current events: Gaza, UN status and the WSFFP


The World Social Forum Free Palestine took place in Porto Alegre, Brazil, at exactly the moment that Palestine was on the front page of every newspaper around the world. The United Nations had just voted (138-9) to grant Palestinians non-member limited statehood observer status at the United Nations.  Meanwhile, people in Gaza had also just survived another brutal Israeli onslaught.


Despite our grief and rage at the latest attack on Gaza, the perseverance of the Palestinian people continues to be an inspiration. As has been true for almost a century, Palestine and the Palestinian people are in the stranglehold of a global negotiation for power and resources. And now, popular movements and uprisings throughout the region threaten the colonial hold of US, Europe, Israel and its collaborators with struggles against repression and mass exploitation of resources, land and people and for basic survival and freedom. In Syria, the death toll has risen to an estimated 40,000-60,000 over the past two-years as people’s fights against repression are suffocated and infiltrated by the interests of these same forces. Click here to read more. 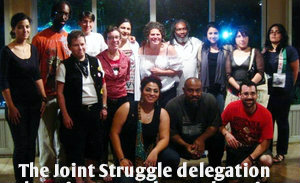 The first thematic World Social Forum to focus on Palestine took place in Porto Alegre, Brazil from 28 November – 1 December 2012. The Forum featured over 125 workshops and a large march and rally in support of Palestine. It was an important gathering of Palestinian and solidarity activists to continue to strengthen the movement for Palestinian liberation and self-determination. 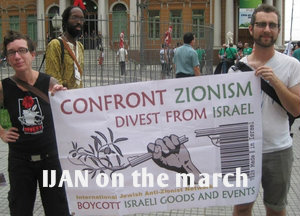 IJAN sent a delegation of six to the forum including members from Canada, Argentina and the U.S. Most of us attended as part of the U.S.-Canada Joint Struggle Delegation – a delegation of 25 activists working in grassroots struggles for the liberation of people and land, which IJAN played a central role in organizing. Specifically, the delegation provided an opportunity for activists involved in resistance to mass incarceration, surveillance and targeting of communities, repression of popular movements and activists, militarized borders, land and resource appropriation and privatization, and the promotion of indigenous self-determination, the rights of refugees, the sustainability of the land and natural resources and the creation of a people’s economy to develop concrete connections between their struggles and the Palestinian liberation movement and identify opportunities for practical work at the intersection of movements. Some of the organizers from the Black Liberation Movement, movements for gender justice, immigrant rights, environmental justice and civil rights participated in joint struggle with the Palestinian movement for the first time.

Click here to keep reading, for links to videos of workshops and for information
about delegation activities since our return. 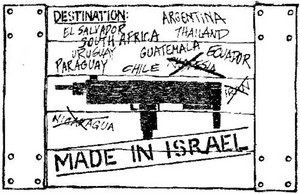 Many of us have been aware of the support and cooperation provided to the white South African apartheid government by apartheid Israel in the form of guns and advisors.  However, few of us had any idea of is the extent of past and current Israeli support for totalitarian and oppressive regimes around the world.  At the WSF Free Palestine, IJAN released Israel’s Worldwide Role in Repression, a 28-page exposé focusing on the role of Israel’s government, military, and related corporations and organizations in a global industry of


violence and repression. The booklet also shows that the states most involved with this industry profit from perpetual war and occupation across the globe while maintaining vastly unequal societies of their own.

The pamphlet formed the basis of a 4-hour assembly on the role of Israel and Zionism in worldwide repression of social movements and communities of color. The assembly was held at the Social Forum in Porto Alegre. Throughout the assembly, which featured testimony from Brazil, Colombia, Argentina, South Africa, the U.S., Canada and Germany, we built relationships with activists in several parts of the world, particularly South America, which will help to expand the scope and reach of the project of documenting and exposing the specifics of Israel’s historical and ongoing role in worldwide repression. Some


testimony from this meeting will be on line soon. After the forum, we shared this project with activists in Argentina and Venezuela, who responded with interest in partnering on the project.  In the coming months, we hope to work with our partners to evolve this assembly into rolling tribunals located in different communities around the world impacted by Zionism. For more information see the project website here. 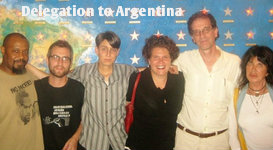 Following the World Social Forum Free Palestine, a smaller delegation of IJAN members and lead organizer with the Malcolm X Grassroots Movement presented in Argentina and Venezuela on the role of Israel in undermining popular movements around the world by supplying weapons, technology and training to repressive governments. We brought with us the Spanish version of the booklet, El Rol de Israel in la Represión Mundial. In both places, there was interest in collaborating on popular tribunals about the impact of the Israel-US role in arms trade and repression in South America. For more information on our delegation, click here.


The international campaign to Stop the JNF (Jewish National Fund) launched on Land Day, March 30, 2011. Since then the campaign has built momentum. In the UK the Jewish National Fund lost over 49% of its funding last year (check it out here!) The JNF UK also recently lost the patronage of the Prime Minister, David Cameron, as well as two other Members of Parliament (MP) after an early day motion signed by 63 MPs was passed in support of the campaign. In the United States, IJAN is coordinating an effort to file a complaint with the IRS combined with a popular campaign to investigate and ultimately revoke the charity status of the JNF.


One of IJAN-Spain’s members is the coordinator of RESCOP - the Spanish network in solidarity against the occupation of Palestine. IJAN Spain was a lead coordinator of the 1st BDS conference in Spain held in Barcelona from October 19-21, 2012. They are now preparing to launch a Stop the JNF campaign in Spain as part of this international effort. To read in Spanish about IJAN-Spain and to see documents from the Spanish BDS movement click here.


Public Service International (PSI) a global trade union federation representing 20 million public service workers in 150 countries, voted at their quadrennial congress in Durban South Africa to support BDS against Israel! For those not usually involved with labor organizations, these international secretariats are instituted to facilitate the coordination of international activity between national unions across national borders. That means some of the largest unions in major industrial countries (including in the United States where both SEIU and AFSCME are affiliates) are now members of an organization supporting BDS.  Only time will tell what the impact will be on affiliated organizations which up until now have refused to acknowledge the viciously anti-labor nature of Israel. To read about the labor movement in Israel, click here.


Click here to see a more detailed report on this new development.


Veolia, a multinational corporation providing utility and other services around the world including in Israel, has been forced to withdraw its £4.5 billion bid for waste disposal in the UK.  Among its other Israeli profiteering schemes, Veolia built and runs a railroad from Jerusalem to some of the illegal settlements in the West Bank. As a result it has been the target of an international campaign for running a de facto Jews-only railroad which enables illegal settlements. Yael Kahn, an IJAN friend in the UK, chaired the No 2 Veolia Action Group on this project to prevent Veolia taking over a huge contract for waste disposal in north London.  Veolia has similarly lost several contracts in other European countries and even in the United States!  Find out more here.