I've seen a few bloggers and twitterers claiming some inspiration from George Orwell.  It's usually the more brazenly dishonest who make the claim with a masthead quote (well paraphrase) like "If liberty means anything at all, it means the right to tell people what they do not want to hear" or a twitter pic with their twitter id thus: 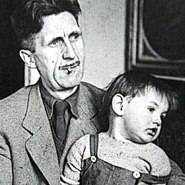 Today I saw a quote from George Orwell in The Week magazine which they said had been in The Observer though I couldn't find it in the recent on line edition.  In addition to the twitterers and bloggers it got me thinking of the Orwell Prize and what a sick joke I think it is.  But anyway, here's the quote:


the great enemy of clear language is insincerity. When there is a gap between one’s real and one’s declared aims, one turns as it were instinctively to long words

Does this remind you of anyone? I immediately thought of how one blogger often uses words like nativism [someone mentioned the rights of the Palestinians], conspiracism [someone accused the government of lying about this or that war], endemic [there might be a kernel of truth in a false allegation], systemic [shit happens].  Ok the words are getting shorter but their meaning is usually a lot bigger than that attributed to them by the writer.

So what's with these people who claim Orwell as their inspiration?  Is it freudian? Are they aware of their newspeak?  I don't know, I just wanted to run the quote and wonder if any disingenuous souls might have a pang of conscience about it.
Posted by levi9909 @ 7:03 pm