This past Friday August 22, 2014, Dr. Hayo Meyer, proud member of IJAN and long time anti-Zionist activist passed away. Hajo was unwavering in his conviction and passion that Never Again meant Never Again for Anyone and in his outrage that his experience in Auschwitz is misused by Israel and Zionism to justify the colonization and ethnic cleansing of Palestine.
Dr. Meyer was born in 1924 in Bielefeld, Germany. When he was barred from attending school there after November 1938, he fled to the Netherlands, alone. In I944, after a year in the underground, he was caught and subsequently survived 10 months at Auschwitz. Dr. Meyer dedicated himself to countering the Zionist manipulation of the Nazi genocide to justify the colonization of Palestine. He played a leading role on the Never Again for Anyone tour of Europe in 2010, and of the United States in 2011.
We will miss Hajo. His message will continue and grow stronger as he is joined by survivors of the Nazi genocide, the descendants of its victims and survivors and all people committed to justice. Our hearts go out to those who loved him.

The morning of his death, the following letter from survivors of the Nazi genocide and the descendants of survivors and victims, in response Elie Wiesel's attempt to justify the attacks on Gaza, was published as in the NY Times. Hajo was the first to sign on.

Since being published, this ad has generated media attention, messages of solidarity, as well as Zionist backlash. Ha’aretz republished the letter and the reposting has generated over 30,000 “likes” on the Ha’aretz Facebook page.
Please stand with the signers of this letter and against Zionist manipulation of the Nazi genocide, please sign this letter of support.

Below is the ad listed in the New York Times. For the full list of signers, click here. 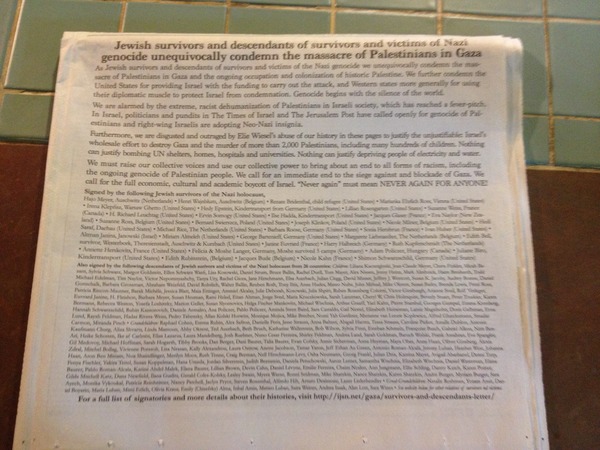 Please stand with the signers of this letter and against Zionist manipulation of the Nazi genocide, please sign this letter of support.