I want to keep this Tweet safe in case Roseanne Barr thinks better of it when she sobers up or gets over whatever it is that's upset her. 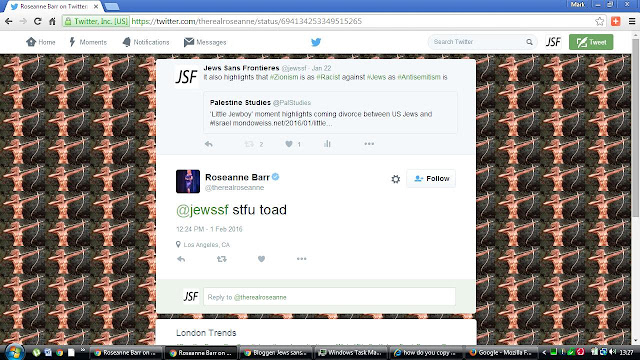 She used to follow Jews sans frontieres on Twitter but flipped out at me a few years ago over something I can't quite remember. I don't know if she unfollowed but she blocked JSF. Clearly blocking doesn't prevent a blocker from hassling a blockee and clearly she still likes to lurk and look.

She's a fickle one, I must say.  She followed JSF when she knew I was anti-Zionist because the account was described as an anti-Zionist account. I didn't follow her account much but I did notice her promoting Gilad Atzmon once upon a time and possibly after she blocked JSF.

Anyway, my guess is that she did see herself as anti-Zionist for a time but that she was happy to promote the conspiracist fringe of the movement and then crossed that thin barely existent line between antisemitism and Zionism.  Which brings me neatly to where this mini-twitter spat began with an aide to Bibi Netanyahu calling a Jewish American ambassador a "little Jew boy" thus highlighting that Zionism is as racist against Jews as antisemitism is.  Mind you she doesn't shed much light on why her name on Twitter is @therealroseanne.  Even Roseanne doesn't seem to know the real Roseanne.  Maybe she's just trying to convince herself.
Posted by levi9909 @ 2:10 pm