Zios' campaign defaming Anti-Zionist activists is "making Jews something of a laughing stock" and worse....

Here's a good couple of letters in today's Jewish Chronicle by Tony Klug and a chap called Andy Coombes.  The JC doesn't publish letters online so here's a pic I snaffled from Ben White's tweet: 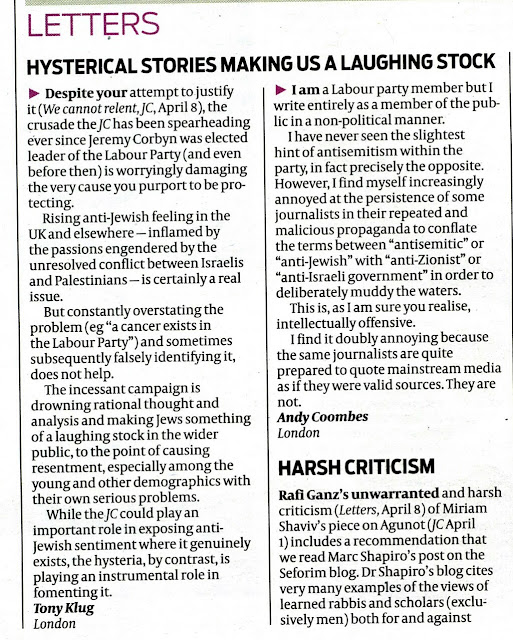 Curiously the JC hasn't gone in too hard on named individuals like The Telegraph and Times did in the case of Tony Greenstein, only to find themselves humiliatingly having to retract.  It's also curious that the JC has allowed any criticism of its own sheer dishonesty.

Given that both the letters focus on what is most obvious to anyone which is simply the dishonesty and exaggeration, it's gratifying that Tony Klug has touched on a very important aspect of specifically Jewish anti-Zionist activism: the question of inter-community relations.  Zionist have been trying for a few years to get Jewish supremacy recognised as a protected characteristic of being Jewish above ethnicity and religion.  That is, they claim their Zionist ideology or their support for Israel to be an integral part of their identity. Given the obviously racist nature of their ideology this means placing the Jewish identity above others; a disaster for community relations.  Now look at Tony Klug's words:

The incessant campaign is drowning rational thought and analysis and making Jews something of a laughing stock in the wider public, especially among the young and other demographics with their own serious problems.

Yes, Zios are making Jews look like a bunch of Woody Allens (when he used to be funny) but the impact of their dishonest racist antics is harmful to community relations and that's no laughing matter.
Posted by levi9909 @ 10:32 pm