Why is a Sun reporter supporting Momentum Head Jon Lansman?

I noticed a Sun reporter, @MrHarryCole touting Jon Lansman ludicrous idea of banning the word "Zionism" from discussions in Labour Party circles.  I thought it was odd for anything anyone connected to Corbyn to get Sun approval.  Sam Kiley, an ardent Zionist, before he began working for Murdoch at Sky actually left The Times because of Murdoch's aggressive proprietorial interventionism for Israel's sake.

Well known Blairite agitator Lansman is calling for sanity and asking comrades to stop banging on about Zionists. https://t.co/aQDWKuub38
— Harry Cole (@MrHarryCole) May 3, 2016

Obviously leftists noticed how Jon Lansman of the supposed grass roots Corbynite support group, Momentum, had won the approval of a Murdoch staffer.  It's hard to imagine that a pat on the back for a Corbynite from a Murdoch staffer would happen without approval from the Digger himself.  It would be like Ha'avara happening without Hitler's approval. At the time I didn't think too much of the Sun imprimatur.  I just tweeted how it was ludicrous to ban the word "Zionism" from Labour Party discussions.  But I then got retweeted by this Harry Cole chap, look:

Now look at the thread after the tweet Cole quote/retweeted: 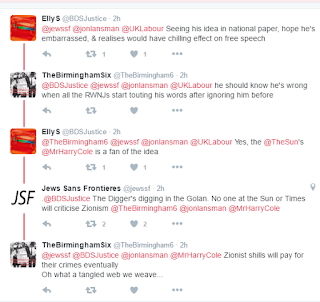 See my little offering there?

.@BDSJustice The Digger's digging in the Golan. No one at the Sun or Times will criticise Zionism @TheBirmingham6 @jonlansman @MrHarryCole
— Jews Sans Frontieres (@jewssf) May 3, 2016

Well at this point Jon Lansman's Comrade Harry Cole seems to have had a panic because now look:

See that? The guy engages with me by QRTing my tweet then blocks me. But did you see the side bar when it asks you to consider following something similar to what you were looking at? Yup, The Telegraph - no surprise there - and Jon Lansman. And why am I not surprised at that one?

So what have we learned? Jon Lansman is either a Zionist himself or at least someone willing to appease Zionism for some short term gain. He certainly seems to have pleased someone at the Murdoch stables. And when I mentioned the Diggers interests in the Golan heights the previously cocky Harry Cole had a panic.