The Video the Board of Deputies, Momentum's Jon Lansman & Politics Home tried to ban

Sheesh, I thought this video was lost and gone forever.   I first heard about it via this piece in Politics Home.  Here look:

A controversial video criticised as a “slap in the face” by Jewish campaign group is still posted on Jeremy Corbyn’s official Facebook page, PoliticsHome can reveal.

The film, made by Mr Corbyn’s campaign team, features his supporters responding to a number of accusations often levelled at the Labour leader’s backers.

One of the questions is ‘Do you promote anti-Semitism?’ – in reference to a string of suspensions and expulsions over the last year.

One of the participants in the video throws away a piece of paper with the question written on it and says “so that’s gone as well”.

The Board of Deputies of British Jews spoke to veteran left-winger Jon Lansman, Mr Corbyn's campaign director, who apparently agreed to withdraw the video.

It has since been taken down from YouTube and the main page of Mr Corbyn’s Facebook account, but it is still available to view on the ‘videos’ section of his page.

“The dismissive video was a ‘slap in the face’ for the Jewish community,” said Board of Deputies chief executive Gillian Merron in a statement released last night.

“Having spoken directly to campaign director Jon Lansman, the Jeremy for Labour campaign now recognises the inappropriate message conveyed and has committed to remove the video and apologise. This is the right result.

Now, after a couple more paragraphs Politics Home hosted the video that the Board of Deputies had complained about and Jon Lansman had apologised for but now look: 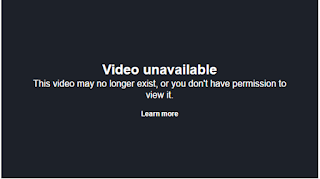 I think we can guess that under the capitulationist advice of Jon Lansman, Jeremy Corbyn's Facebook probably zapped the video too.  I asked one of the participants if they retained a copy but they hadn't. I was getting frantic.  Even when Politics Home hosted the video it couldn't be downloaded.   But when you see the video you will see that there was nothing in it to complain about or to apologise for which I am guessing is why Politics Home removed it.  And now thanks to Jamie Stern-Weiner who found it on YouTube here it is:

So just like the whole of the antisemitism smear campaign against leftists and Palestine solidarity supporters this is yet another case of "nothing to see here", which in the case of Politics Home and probably Corbyn's Facebook page is now literally true.

PS: I've just seen that Harry's Place has missed the point of the removal of the video and hosted it on their racist site.  It was actually HP's David Toube (he calls himself Habibi) who uploaded it to YouTube but rather smartly disabled the comments.