I'm getting an Access Denied message on this Jewish Chronicle post but thankfully it is still accessible through Google cache. Google cache doesn't last long so here is the article in full: 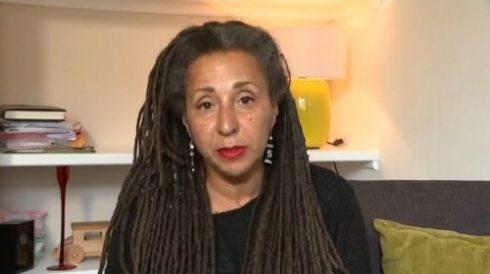 Jackie Walker, vice-chair of the Momentum group, on Channel 4 News (Photo: Channel 4)
Jackie Walker, vice-chair of the hard-left Momentum activist group, is expected to be removed from her position on Monday following comments she made about Holocaust Memorial Day.
The move is expected to be confirmed at a meeting of the committee of the pro-Jeremy Corbyn group after a Momentum spokesman told the Guardian that senior members were seeking to remove Ms Walker.
It is not known whether she will be suspended by the group, or by the Labour Party, of which she is a member.
In Monday’s Jewish Labour Movement training session on tackling antisemitism, which took place at the party conference in Liverpool, Ms Walker criticised Holocaust Memorial Day, claiming it should remember genocides other than the Shoah.
She was told that the annual memorial did recognise other episodes of mass murder, but Ms Walker, the vice-chair of the hard-left Momentum group, went on to claim she had not seen a definition of Jew-hate which she could “work with”.
Ms Walker – an ally of Jeremy Corbyn – was suspended and investigated by the party earlier this year for claiming Jews were responsible for the slave trade and an “African holocaust”.
The renewed calls for her to be expelled from Momentum came as Ms Walker defended herself on Channel 4 News.
In an interview with Cathy Newman, Ms Walker said she was not antisemitic, but admitted to being anti-Zionist.
She added: "Whoever leaked this story from a training event had malicious intent in their mind."
The claims of antisemitism were politically motivated, Ms Walker suggested, adding that “prominent” Jewish groups agreed with her.
There were also reports that Jon Lansman, the Jewish founder of Momentum and a friend of Ms Walker, had “reached the end of his tether” and wanted her to be thrown out of the group.
Further pressure came from the TSSA trade union. Manuel Cortes, its general secretary, said: "I am deeply saddened that a fellow member of our Labour and trade union family holds such antisemitic views.
"I am asking Jackie that in the interests of unity she resigns at once from our party and also as vice-chair of Momentum.
“If she doesn't, both the Labour Party and Momentum need to act to get rid of her at once. Furthermore, TSSA will reconsider our union's support for Momentum if she is still in post by this time next week."
Tony Greenstein, a Jewish anti-Zionist activist who was himself suspended from Labour earlier this year, wrote to the party’s National Executive Committee members on Thursday night telling them the JLM session had been “a publicity stunt”.
He wrote: “Jackie's points re the Holocaust not being a solely Jewish preserve and the fact that the definition of antisemitism is contested, are not in any way antisemitic.
“This artificial and concocted hysteria has nothing to do with antisemitism and everything to do with the Zionist movement’s attempt to construct a hegemonic narrative concerning the Nazi Holocaust.”
John Mann, the Labour MP who chairs the All-Party Parliamentary Group Against Antisemitism, said: "Enough is enough. Though she claims impunity for many reasons, Jackie Walker’s behaviour is discriminatory, provocative, offensive and by any standard unacceptable in a modern political party.
"Not only has she caused offense personally, she has inspired waves of antisemitic and racist backlash including Holocaust denial.
"Not only must she be expelled from the Labour Party immediately but all those abusing others in supporting her must go too.
"Temporary suspensions are not good enough, these people must be given permanent bans and no platform to express their antisemitism anywhere in the Labour Party, if we are to be serious about opposing anti-Jewish hatred.”


The last time I noticed the JC denying access to an article was when it wrote in praise of some pig food product in its travel section and a reader complained. I wonder what's not so kosher about the above article.