I got a tweet just yesterday purporting to support my own tweet and Ken Loach.  It was clearly antisemitic.  Here it is:

I wasn't sure what to do at first.  I checked the account and saw there were 4 of my mutual followers (ie I follow them and they follow me) and I alerted them by DM.  Two unfollowed, the other two don't seem to check their accounts regularly.  All four seem to routinely follow the accounts that follow them and this fake account only intersperses tweets with antisemitism. 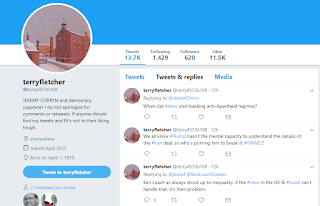 One of the people who did respond to my DM said that a lot of these bogus accounts use 8 numerics after a name as this terry45336188 did.

I noticed that the account "joined April 2012".  So it appears it wasn't founded specifically to undermine Corbyn but it is definitely a bogus account.

Moral of the story, never just follow an account because it follows you, always scan the profile and a few tweets of an  account you are liking, retweeting or following.  Sorry to come across as censorious but Zionists are jumping through hoops to smear their critics, opponents and victims as antisemitic.  This is all they have because there is, of course, no case for Israel.  Their claims are getting increasingly desperate and ludicrous but they are still space and time consuming so a little bit of due diligence can stop these time and space wasters, er, wasting time and space. N'est pas?

PS: I just checked the account again and I am blocked.  They're determined, these people. Can they be a genuine Corbyn supporter and an antisemite?  It's very doubtful.  If they were sincere in their antisemitism they would surely have remonstrated with me to persuade me that antisemitism is ok.  If they didn't realise that slagging off Jews qua Jews is antisemitic then still they might have put an argument together or simply apologised having seen the error of their ways.  But instead of that, I get this:

I looked at their account with another account of mine and they're just as shrill but there was nothing explicitly antisemitic but he really wants an endorsement from Ken Loach.  See this: 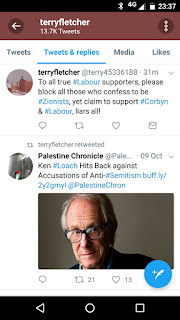 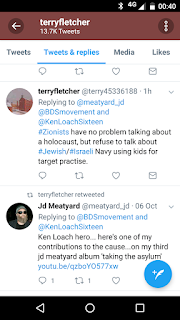 Don't these Jew haters just love Ken Loach, the high profile anti-Zionist, Zionists have had in their cross hairs since the Labour Party Conference.  Coincidence?  I don't think so.....