Zionism should be included in an encyclopaedia of racism 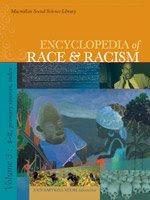 Clunky headline I know but references to zionist censorship are so cliché because it happens so often. Regular readers on the subject of zionism may know that there has been a game on for some time over the fact that a very expensive Encyclopaedia of Race and Racism has been published including, as well it should, a section on zionism. The section is by a chap called Noel Ignatiev, the prime mover behind the anti-racist magazine, Race Traitor.

I first noticed the attack on the publishers by zionists on the Engage website. They ran a post headed Macmillan USA Encyclopedia Damns Zionism as Racism - Ben Cohen. Ben Cohen, a former anti-zionist activist, now appears to be the main man at the Z-word blog, which is sponsored by the American Jewish Committee. He starts his article thus:

Noel Ignatiev is one the last people you would expect to be authoring an entry on Zionism for an encyclopedia published under a well-known, trusted imprint. But open Volume 3 of the “Encyclopedia of Race and Racism,” which carries the names of both Macmillan Reference USA (now owned by the Michigan-based Gale, Cengage Learning company) and the Macmillan Social Science Library, and you will see that he has done just that.

The Race Traitor site has a motto, "treason to the white race is loyalty to humanity". That alone must spawn many a sigh of relief in self-hater circles and his identification of and campaigning against racism, including his writing on zionism make him a fair candidate to write a section on zionism in an encyclopaedia of race and racism.

The attack on Noel Ignatiev is just one prong of a two pronged attack on the publishers but let's just deal with the attack on Ignatiev for now. Cohen continues:

Some of you will be wondering who Ignatiev is. I first came across Ignatiev’s name a few years ago, when the antisemitic writer who uses the name “Israel Shamir” referred to him as “our good friend.” Lest I be accused of damning by association, I should point out that Shamir and Ignatiev appear to have their disagreements, although these will be barely intelligible to those not familiar with the obscurantist doctrines they represent.

Follow the link that Cohen so helpfully provided and you will see he is indeed "damning by association". See this from the Shamir site reproducing one of Ignatiev's responses to Shamir:

My second difference with you is over the historic importance of the Jews… Even if no such people as the Jews had ever existed,… the world would be pretty much as it is…. Nineteenth-century capitalist society brought with it poverty, disease, and ignorance for the wage slaves of Europe and America, not to mention the Irish famine, the poisoning of the Chinese people with opium, [and] the reduction of the population of the Congo by ten million over fifteen years and no one has ever suggested that nineteenth-century capital was dominated by Jews or that it had a neo-Judaic character. In Capital and the Grundrisse Marx analyzed and forecast with amazing accuracy the development of society from his day to ours , and while he was certainly not soft on the Jews he had no need for them as an element in his study. Even if every Jew were a capitalist and every capitalist a Jew, I would still be anti-capitalist, not anti-Jew, because capital is the force driving the planet to destruction, and “the Jew” is at most its personification.

I recall someone reproaching you for being soft on David Duke. You replied that in all likelihood the one reproaching you would have been willing to overlook Duke’s white supremacism had Duke not also been against the Jews. If so, it were a grievous fault. It is also wrong to overlook Duke’s white supremacism because he is against the Jews. Duke, the National Alliance, and other advocates of White Power are no friends of ours, notwithstanding their anti-zionism….

For Shamir antisemitism is at the heart of his worldview and Jews are responsible for all that is wrong with the world. Look at the piece from Ignatiev. He rejects, in toto, the worldview of Shamir. Nothing obscurantist there.

The other prong of the attack is the inclusion of Zionism in the encyclopaedia at all and here an error of Ignatiev's could have helped them but truth is so far from the zionists' considerations they missed their opportunity. Here's Ignatiev on zionism:

Because it defines Jew not by religious observance, language, place of birth, or culture, but by descent, Zionism is an ideology of race.

But there are many ideologies of race which are not repugnant like zionism is. Zionism can actually include just about anybody from a Russian neo-nazi with a Jewish granny or granddad to a Peruvian native fast-tracked into chosenness by a huckster rabbi. It's who zionism excludes that makes it racist, not who it includes. It excludes the natives of Palestine, it displaces them, it occupies them or it oppresses them as second class citizens.

The fact that Jews have been identified by nazis and, in the old days, zionists, as a race was presumably a consideration underlying some examples of zionist collaboration with the nazis and it may well make a section on Jews a legitimate entry to an encyclopaedia on race and racism but to define zionism as an "ideology of race" doesn't do it a derogatory term. Au contraire, it nearly gets it off the hook. It favours settlers over natives and it's that that makes it racist and it's that that situates zionism well in the racism section of an encyclopaedia of race and racism.

I don't want to damn the guy over the difference between race and racism but the zionists are trying to make out that zionism is just another nationalism when it isn't even nationalism. By identifying zionism as an "ideology of race" Ignatiev comes close to equating zionism with certain resistance ideologies that are equally "ideologies of race" but clearly not racist ideologies.

Now the inclusion of the section on zionism is a must for an encyclopaedia on race and racism and that such a section made it through to publication is news in itself and cause for celebration. But what brought it to my attention was the campaign against it. The campaign was initiated by the American Jewish Committee and the Zionist Organisation of America. Well, according to the Jewish Telegraphic Agency, they have succeeded in wringing an apology from the publishers. But for the Zionist Organisation of America, that isn't enough:

"We appreciate Gale/Macmillan’s apology to those who, like us, are appalled by the falsehoods in the existing chapter equating Zionism with racism and its undertones of anti-Semitic bigotry that help to delegitimize Israel’s right to exist," the ZOA wrote. "But there is only one way for Gale/Macmillan to rectify the wrong, and that is to withdraw the chapter from the online and print editions of the encyclopedia."

So, not content to smear the author of the section, the zionists want the only trace of this fairly good primer on zionism to be expunged to the extent that all that will remain of it are zionist smears against its author.