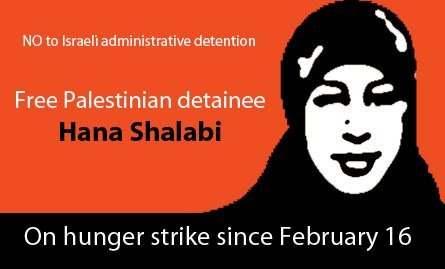 On her 14th day into the strike, Hana Shalabi is the second Palestinian prisonner to launch a hunger strike against "administrative detention." According to Adameer,

Hana was arrested on 16 February, less than four months after being released from over two years in administrative detention on 18 October 2011 as part of the prisoner exchange deal concluded by the Israeli government and Hamas, whereby 1,027 Palestinian political prisoners were released in exchange for captured Israeli soldier Gilad Shalit. During her arrest, Hana and her family were beaten and harassed by Israeli Occupying Forces. After being taken to Salem Detention Center, Hana was subjected to additional beatings, humiliation, and other stark violations. She immediately began an open hunger strike and was subsequently placed in solitary confinement as punishment. (Adameer)

Not only has she been kidnapped and incarcertated lawlessly by the Israeli apartheid authorities, her kidnapping is another reminder that Israel's signature on any agreement is worth nothing.