Blair's Hypocrisy and the Riddle of the Sphinx 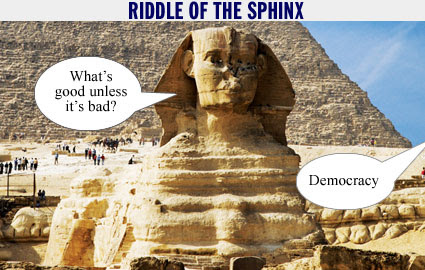 The same page (5) has a brief summary of Blair's love affair with democracy in Egypt:

"I am a strong supporter of democracy," the great peacemaker wrote in Sunday's Observer.  "This struggle matters to us.  The good news is that there are millions of modern and open-minded people out there.   They need to know we are on their side, their allies, prepared to pay the price to be there with them."

The former PM knows Egypt well, of course.  As we pointed out after the 2011 revolution that toppled president Hosni Mubarak, Blair was happy to take his Christmas hols in the country no fewer than five times between 2000 and 2005 when the Egyptian dictator's regime was at its zenith.  At the first of those visits, Blair was "a guest of the Egyptian government at two private government villas at Sharm-el-Sheikh", according to his entry in the register of MPs' interests, while on at least one subsequent trip Mubarak paid for the flights.  Can this be what the vicar means about showing pro-democracy Egyptians that "we are on their side" and, er, "prepared to pay the price to be there"?

Of course as neoconservatism's ambassador at large, indeed, the man who puts the Con in NeoCon, Blair can excuse anything that doesn't quite tally with his professed commitment to democracy.  And here's a little nugget reported in The Observer (Guardian online)  that the Eye missed out:


"I am a strong supporter of democracy. But democratic government doesn't on its own mean effective government. Today efficacy is the challenge."

Leaving it to The Observer to note:


Having taken this country to war in Iraq in 2003 despite huge public opposition, including a march by more than a million people through London, Blair now argues that shows of public unrest such as that in Egypt – fuelled and organised through social media – cannot be ignored.

PS: I was looking on google for a quote about Blair from former Tory MP, Matthew Parris.  I couldn't find it but here's Parris on Blair from Wikipedia:


I believe Tony Blair is an out-and-out rascal, terminally untrustworthy and close to being unhinged. I said from the start that there was something wrong in his head, and each passing year convinces me more strongly that this man is a pathological confidence-trickster. To the extent that he ever believes what he says, he is delusional. To the extent that he does not, he is an actor whose first invention — himself — has been his only interesting role.

What I find interesting about this quote in the Matthew Parris Wikipedia entry is that the quote itself says nothing specific about Parris though it does sum up Blair.  It would be more appropriate for Blair's own entry.  It appears that hatred of Blair is so widespread some people will use any outlet to vent it.
Posted by levi9909 @ 1:51 pm