Remember those notes I posted up about a Zionist Town Hall type meeting where people kept badgering the Board of Deputies of British Jews over what they're doing for plucky little Israel at a time like this.

The BoD were promising to organise a rally for Israel some time next month.  I think I have stumbled on the details of the rally.  I could be wrong because it's not actually next month, it's tomorrow, but I think this is the flyer: 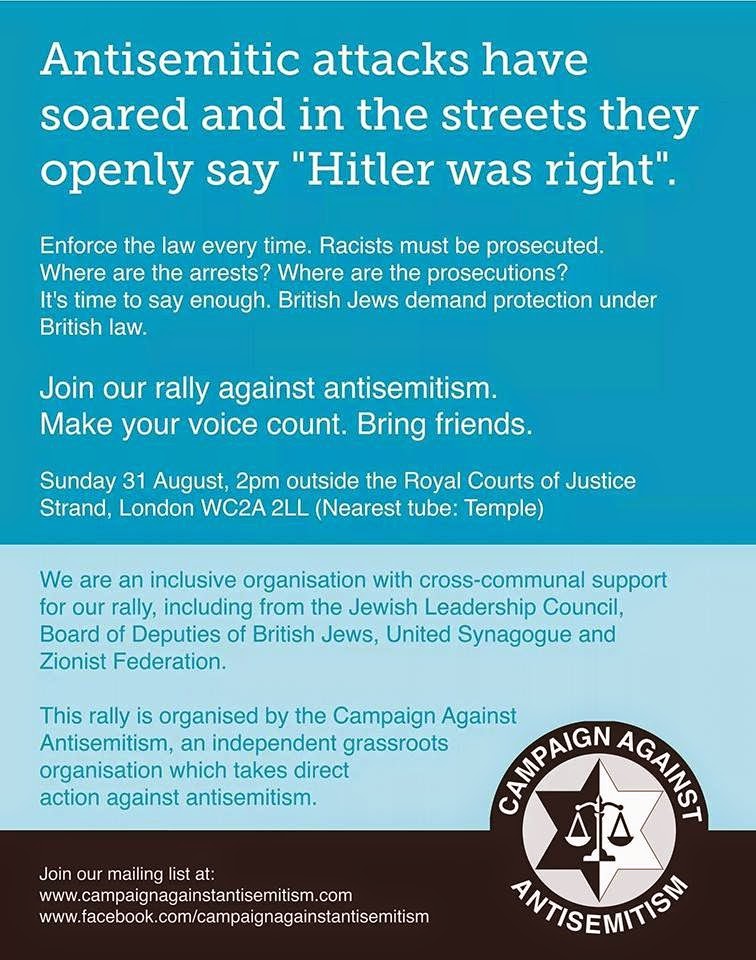 "They openly say "Hitler was right""? Wow!  Who says that?  Oh well, never mind. The Zionists have realised that there is no positive case for the racist war criminals of the State of Israel so it's back to routine negative hasbara by smear.  You don't get many demos at the Royal Courts of Justice but you do get lots of roadworks and traffic bottlenecks so I am guessing since they know they'll get a paltry turnout they're hiding their shame.  I mean they wouldn't be well seen if they met at, say, Trafalgar Square, but at the Royal Courts of Justice on the Strand the fact that they can't be seen for lack of numbers won't be seen.

UPDATE: I've just seen the Board of Deputies' website on this rally:

This Sunday the Board's Senior Vice President Laura Marks (pictured) will be joining the likes of Chief Rabbi Ephraim Mirvis, parliamentary candidate  and co-founder and chairman of Quilliam, Maajid Nawaz, and the social commentator Douglas Murray in addressing a communal rally organised by the Campaign Against Anti Semitism.

The Board is  firmly   behind this vital initiative at a time when reported cases of anti-Jewish incidents are at record highs across the UK and the need for the law to be firmly applied relating to hate crimes is absolutely vital. The rally will also include messages of support from the denominational movements.

Labels: Board of Deputies, Douglas Murray