Is Corbyn Embarrassing Corbyn or the Zionist "Glitterati"?

I just noticed a Marcus Dysch article in the print edition of the Jewish Chronicle headlined, "Yet again, Corbyn has embarrassed himself".  I googled those very words out of quotes to see if the piece is on line and, yes, it is.  Here's the search, Yet again, Corbyn has embarrassed himself.  And top of the list is Dysch's article.  It's a gripe about Jeremy Corbyn refusing to attend the Balfour Declaration celebratory dinner.

It was, of course, an open secret among communal leaders that Jeremy Corbyn was unlikely to accept their invitation to next week’s gala Balfour Declaration centenary dinner.
The Labour leader, with decades of anti-Israel campaigning under his belt, was never going to sit alongside the country’s glitterati — its political, social, religious, diplomatic and charity leaders — for the slap-up meal.
When the invitations went out, I was told by a senior Jewish Leadership Council figure that no pressure would be put on Mr Corbyn to turn up, nor would a fuss be made if he declined.
After the past two years of trials and tribulations between the Labour chief and the community, there was no desire to cause embarrassment, or a major row, on either side.
As my source predicted, Emily Thornberry will represent Labour, although the Leader of the Opposition’s office failed to live up to the other part of the prophecy and blame a diary clash, offering instead no explanation for his absence.
So there was a muted response beyond Jonathan Goldstein saying it was “deeply unfortunate” and Hamas welcoming the news.
Let’s be honest, few friends of Israel will have wanted Mr Corbyn there. But it is the principle that counts.
Ms Thornberry filling in for Mr Corbyn at a Labour Friends of Israel reception at the party conference last month brought ridicule on them both when she claimed he was preparing for his speech but everyone knew he was out partying.
For the Labour leader now to avoid this major event sends another clear message, and shames his party.
If Mr Corbyn wants to be Prime Minister, he needs first to learn how to be a statesman. The great offices of our nation demand more than former backbenchers still clinging to personal grievances.

What's noticeable about the piece is the sheer arrogance it oozes.  The "country's glitterati" are to celebrate handing Palestine on a platter to the Zionist movement.  Seniors of the Jewish Leadershio Council decided, "no pressure would be  put on Mr Corbyn to turn up, nor would a fuss be made if he declined."  Well that's very big of the big wigs and Mr Corbyn didn't even have the decency to invent an excuse for refusing to celebrate the UK's and Israel's imperial past and present.

But the google search threw up other finds too including the words Corbyn and something with embarrass as its root.  A debate between Corbyn and Owen Smith in the second Labour leadership contest had a LabourList article asking, Was Corbyn "an embarrassment" or did he carry himself "with dignity"?  Of course we now know he carried himself with enough dignity to win the contest.  That was last year, 2016.

Next up we have Huffington Post finding "Ex-Jeremy Corbyn Supporters" who "Are 'Embarrassed' They Voted For Him".  That was before the second leadership bid.  2016 again.  I wonder how embarrassed they are now he came close to winning the general election this year.

The list on the google page goes on.  The fact is, Marcus Dysch's arrogance is misplaced.  Corbyn has not embarrassed himself at all.  He has shown himself to be in a position to embarrass the Zionist movement which is precisely why these Zionist "glitterati" aren't making a fuss about the second slap in the face Corbyn has dealt them since refusing to attend a Labour Friends of Israel rally at the recent Labour Party Conference 2017 in Brighton. 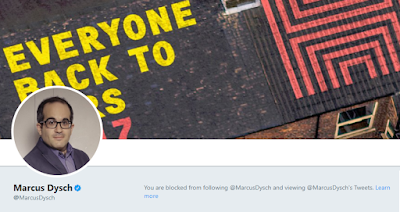