If you read my previous post, you'll know the basic plot.  The Jewish Chronicle published on its website a crop of letters from the print edition.  As it happens, I can now see the plot - which was in my mind mostly - unravelling as I write this.  Well they listed the correspondents in the sub-heading and printed out the letters, including one from Deborah Maccoby.  Well, the next day on the same page, Deborah's name had gone from the sub-heading and so had her letter from the page.

I found the original page on Google cache, did my previous post and tweeted thus:

And the Jewish Chronicle tweeted their reply thus:


The letter went up online this week too early. If you look at the hard copy of the paper, it's not in there - bec it is running this week.
— The Jewish Chronicle (@JewishChron) October 29, 2017

What that meant was that the print edition of the JC which most people get on Friday carried all the letters published on line on that day, 27 October 2017, but not Deborah's.

Deborah's local JC stockist didn't get their copies on Friday and she still hasn't seen it.  "My" copy is a typical JC and it passes through many family member hands before it reaches my pair.  In fact, I was reduced to buying the blooming thing for the first time since my mother died last year.

And what do you know?

Look at the blurry pic I just took. 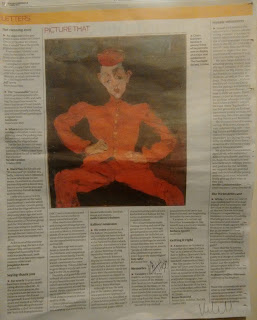 I think you can make out the names.  They are:

Now this is where the plot gets a bit thicker.  Let's have a look at the first manifestation of the JC letters webpage: 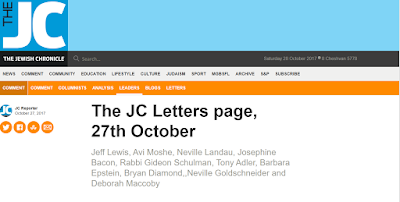 And after the "correction":

Now this chimes with what the JC said in their tweet.  You see?  Deborah Maccoby's letter wasn't published in Friday's print edition.  But scroll back up and see Professor Geoffrey Alderman in the print edition but not the webpage.  More mystery.  What happened to the Professor?

But back to Deborah.  According to Deborah, she sent the letter in good time for publication in last Friday's edition so if it was going to be published she would have expected it to be published then.  Now the JC, via its tweet, seems to saying that her letter is going to be in this Friday's edition.  Before I saw the last print edition today I had assumed Deborah's letter was in that one.  So now, if the JC, is saying that Deborah's letter is pegged to go into the edition of  Friday 3 November we can expect to see the letter in print on that day and on line on the same day.

In the meantime. let's see that letter again in case it does another disappear:

In his Holocaust Education Trust dinner speech ( “The scourge of antisemitism is changing form”, JC, October 20 2017) Andrew Neil erroneously cited the Free Speech on Israel fringe meeting at the Labour Party Conference: “the chair of the meeting asked: ‘We demand the right to debate ‘Holocaust: yes or no’”.
The chair of the meeting, Naomi Wimborne-Idrissi, made no mention of the Holocaust.  The guest speaker, Miko Peled, an Israeli-American who is not a member of the Labour Party, said:
“This is about free speech, the freedom to criticise and to discuss every issue, whether it’s the Holocaust: yes or no, Palestine, the liberation, the whole spectrum.  There should be no limits on the discussion”.
Peled was defining free speech as a principle, not calling for a Labour Party debate about whether or not the Holocaust happened, as was implied by Mr Neil.
Later in his speech, Andrew Neil quoted Mark Twain: “the truth has barely got its boots on before a lie is halfway round the world”.  Exactly.
Deborah Maccoby,
Leeds LS17


I must say, I'm still puzzled about Professor Geoffrey Alderman.  Why didn't his letter appear on line?
Posted by levi9909 @ 11:07 pm