The depictions are of, from left to right in order of appearance, Rupert Murdoch, Bibi Netanyahu and a puppet from UK television called Sooty.  The cartoons above are a response to the allegation, false in my opinion, that the following cartoon was antisemitic: 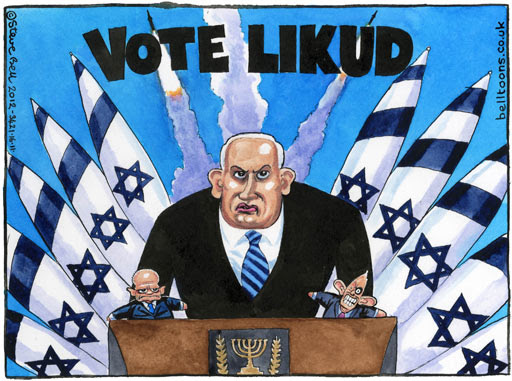 The cartoon was saying that whatever was being said by Netanyahu about the November 2012 Israeli attack on Gaza was being thoughtlessly repeated by UK foreign minister, William Hague, and Israel's ambassador at large (for now), Tony Blair.

During the same month, Rupert Murdoch issued the following tweet:

Why Is Jewish owned press so consistently anti- Israel in every crisis?
— Rupert Murdoch(@rupertmurdoch) November 18, 2012


Now to many, I hope most, people, this was instantly recognisable as antisemitism.  There were immediate protests and Murdoch, in spite of being too stupid to know what he had done rushed out an apology:

But there were no protests from the usual suspects. For example, checking Harry's Place archive for November 2012 there are no criticisms of Murdoch's original tweet nor his what-did-I-say apology.  And in the thread for the piece condemning the latest Steve Bell cartoons it's clear that the HP faithful don't even see Murdoch's "Jewish owned press" tweet as antisemitic.  I'm guessing the above the line crew just think it's best ignored.  If you look at the thread you will see that the faithful had no idea that Murdoch had no idea what he had said that was wrong.

But what did he say that was wrong?  His terminology was very unfortunate. Murdoch is not Jewish and he owns more press than anyone so he knows that not all of the press is Jewish owned.  If his tweet recalled the trope that the Jews own the media he can't have meant that.  But some might say that unfortunate terminology alone was worth the apology.  He was actually saying something like "why aren't those media outlets which are owned by Jews not more supportive of the racist war criminals of the State of Israel?"

And that is the antisemitic bit. He is berating Jews for not living up to his expectations of them.  And that is one of many racist things about Harry's Place.  They are smart enough to know that Murdoch's tweet was antisemitic but it is no more antisemitic than they are when they berate Jews for not falling into line over the latest batch of zionist atrocities.

Actually there is another antisemitic bit.  Whilst Murdoch wasn't saying that Jews own all of the media, he does seem to think that if some Jews own something then all Jews own and are responsible for that same thing.